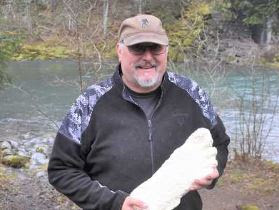 A new search for the elusive bigfoot is underway in Mt. Hood forest according to the Portland Tribune.

Scot Violette was hiking in the Blue Mountains in Eastern Oregon last summer when he saw what he believed to be Bigfoot.

Violette said the first thing he noticed was the smell, which he compared to "wet dog rolled in garbage." As he approached closer, he heard the creature growl.

And then he saw its face through the trees.