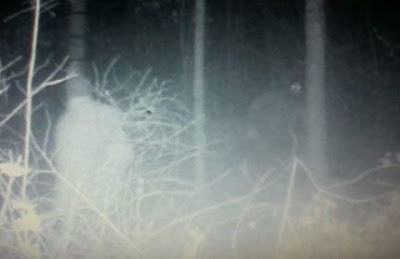 Dixie Cryptid on youtube recently came across a new bigfoot photo that had surfaced on the Internet via an outdoors Facebook group. It looks like the image is gaining some attention, and was recently featured on Coast to Coast AM.

An eerie trail cam photograph circulating online seems to show some kind of figure lurking in a forest and some suspect that it could be a Bigfoot. The origins of the image are uncertain at this time as it first appeared a few days ago on a Facebook group devoted to celebrating the outdoors and was attributed to an unnamed third party. Presumably the photo was submitted to the group by the individual in the image as he included a bit of information about the scene.

Claiming to be a hunter, the purported source of the photo says that "the person on the left is me walking to my ladder stand and it looks to me like there's a person on the right, but I walked down myself and didn't hear anything." As can be seen in the image, to the right of the individual appears to be a set of glowing eyes which look like they belong to a rather sizeable bipedal creature as the vague outline of a body suggests.