The Dogman of Michigan 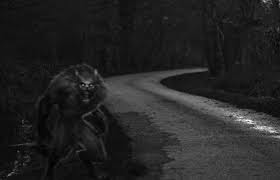 Dogman has become extremely popular in the cryptid world over the past several years, and no place is more famous for these upright canines than the state of Michigan.

For a rural man like Ray Greenway, creepy eyes twinkling in the darkness was nothing to be worried about. He lived in the area of Manistee, Michigan, a place containing its fair share of critters.

One particular night in 1986 however, he had a brush with nature he didn’t expect. He spotted a pair of twinkling eyes, but something was wrong. They were high in the air, not where you’d expect the gaze of a four-legged creature to be.

To Ray’s surprise, the thing, whatever it was, made a break for him and then jumped clear across the road never to be seen again. He may have glimpsed a bit of fur but, as an article for Ranker puts it, one thing that’ll always stay with him is those “yellow eyes.” In the same piece Ray recalls “that I saw both eyes, as if it was looking at me, the whole time. That, along with the leaping ability, is what I will never forget.”