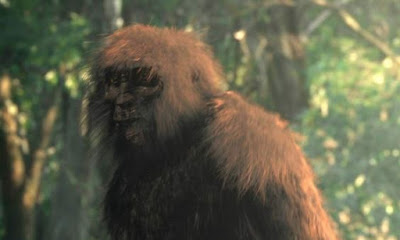 An eye witness gives a detailed account of a sighting of an Australian yowie. Apparently the reporter isn't up on their cryptid-lingo, and calls the creature by the wrong name. But we know what they are talking about.

“He was above six feet tall, all covered with scary hair and growled,” says the frightened woman. In Australia there are no bears and no anthropoid apes, and monkeys, too ordinary. So who exactly so much frightened resident of New South Wales logic and science to explain does not work, reports the Chronicle.info with reference on Paranormal news.

She is the witness sure that it was a “Yovi”. This word the natives call the local equivalent of Bigfoot.

About the incident on 22 August 2018, wrote the Australian newspaper “The Northern Star”, but the meeting with Yovi happened on March 5. It occurred in the area of Uki (Uki), national Park mount Jerusalem.

Met the hairy creature the woman wished to remain anonymous. She said that at about 7 o’clock in the evening returned after playing cricket in the car from Uki to his home, but badly wanted to use the toilet and stopped on the roadside. With you, just in case she grabbed a bat for cricket.

“There were a number of small closed area of the collapsed tree and I stepped back for him to see me. When I finished, I suddenly heard around me someone. I thought it was a dog and he blowed it. No one answered. I was again blowing, and suddenly the answer was grunting and growling”.

The woman grabbed a bat for cricket, when I saw that something moved near the fallen log. And then she heard a knock. She decided to knock at the answer being answered with a new knocking.