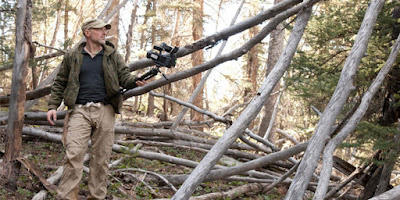 The fine folks over at bigfootbase.com shared this awesome interview with us. They had the opportunity to sit down with the Survivorman Les Stroud, and speak with him about his new endeavors, bigfoot, and a few other things. Check it out:

Is there any piece of evidence that the public hasn’t seen that has influenced you? Is there a video or maybe some audio that isn’t available that you have come across– maybe something from Todd outside of the Survivorman Bigfoot production– that kind of keeps you going on this topic? That kind of keeps the bait fresh, so-to-speak?

LS: Ya, it would be the real-life stories from close friends who tell me of an experience, who want no notoriety, and they’re just sharing their story. I had a guy here this morning actually– it’s those. Because nobody has anything to gain or lose at that point. And they’re not being interviewed for a TV show. They’re not in to the subject matter. And they come along and they, out of the blue, they share with you, “Well as a matter of fact, ya know, I was comin’ home from school one time and la da da…” It’s those things. Because again, these are people who are friends with me regardless of anything. They’re not like new acquaintances who are hanging out with me because I’m Survivorman. These are friends. And so, when they tell me these stories, y’know, it leads me something that I’ve been kind of harping on lately.

It’s a great question that leads to that, because I love this little thought of mine here. And that is that when you have somebody say to you, “I saw a Bigfoot”. Let’s establish that this is somebody that you trust. Someone that you respect. We’re going to go right there. You trust them. You respect them. And they say to you, “Last weekend from 15 feet away I saw a Bigfoot. Now you only have four places you can go with that. Number one is they’re delusional… suffering from a delusion. Number two is mistaken identity. It was a bear. But again, this is someone who’s very experienced in the bush, knows animals, and they’re saying they were 15 feet away from a Bigfoot. Number three is they’re lying. And number four, the final one, is they’re giving you an accurate representation of what they saw.

So that’s a neat little compartmentalized way to react to somebody telling you I saw a Bigfoot. If you see it on YouTube, or you hear it on the radio or whatever. Ok but let me dig just a little bit deeper for a second, a friend of mine said that to me– a young guy that I know– he said oh yea this woman that I know she’s seen them twice and– here’s the catch — after he told me that he really adored this woman, she’s a really nice lady, she told me she saw them twice, he closes it off with– and this is probably going to be familiar to you– he closes it off with “ehh y’know eh I don’t know if they exist.” And when he does that I stop him immediately and go:

“Hang on, hang on a second here. You’re not sure they exist?”

“Oh no. She’s a liar, isn’t she? If you’re saying after the fact that you trust her, and she’s telling you from 15 feet away with her experienced woods eyes that she saw a Bigfoot, and you’re saying you still don’t know if they exist, is you’re saying that she’s a liar. I want you to tell me.” And I’ll do this, I will literally say, “I want you to say Nancy is a liar. You can’t say it? Then what are you saying?” You see where I’m going with this? Too often it’s easy for people to hear something, say it comes from their uncle who they love, who’s like a conservation officer, who’s like really intelligent and he says, “I’m telling you, I stood there and I watched it for a half an hour…” You will still go, “Ehhh I don’t knowwww. I don’t know if they exist.” I’m like, well ok go call up your uncle right now and I want you to tell him that he’s a liar. Because after that we’re left with either they’re delusional, we’ve already ruled out that they’ve made a mistake because of their experienced eyes, so you’re left with– and the delusional thing as far as I’m concerned is a cop-out. That’s not fair. You’re saying everybody’s delusional. Or it’s a mass conspiracy theory to hoax. That’s not fair. You’re left with only two things: they’re lying or they’re telling the truth. And if they’re telling you the truth, guess what that means: Bigfoot is there. You see what I’m saying?