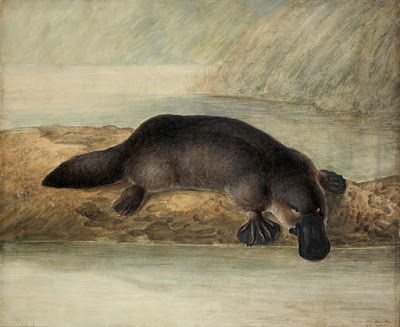 Platypus are some of the strangest creatures in existence, but there have been a few sightings of them in places they aren't even supposed to be. Such as North America.

Several years ago Mike F., a successful Ketchikan businessman, contractor and retired fisherman asked me following a chat about Sasquatches whether I had ever studied or read anything about platypuses in North America, specifically whether I knew of any prehistoric giant forms. When I got back to him on this and replied that there may have been a slightly larger earlier form known but not in N.A., but nothing really big, he looked puzzled. I asked him why and after a moment's hesitation he answered that as a young man forty or so years ago he had stood on shore near Mountain Point south of Ketchikan [in Alaska, USA] and spent a minute watching an animal in the water at very close range that simply resembled a giant platypus. He described the creature as dark with a bill and feet like a platypus only the overall size was six feet or possibly greater. He gave no mention of the tail if there was one. The sighting was in shallow water on a rocky shoreline and the creature was close to the surface. I could probably get a few more details such as season and so on. This man is an experienced commercial fisherman and stated categorically that it was not a known species of seal. Ocean temp here doesn't vary much from 50 degrees. All I have right now.