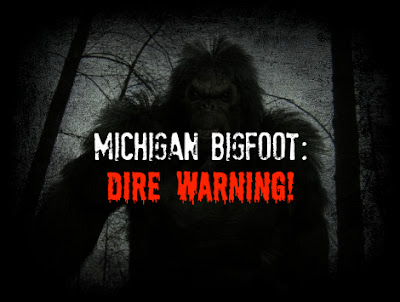 It was approximately 12:30 PM on a hot muggy July night in Munising, Michigan. Laurie and her companion decided to go to the lookout high on a bluff overlooking highway M28. They were sitting on top of the hood of their car chatting and passing time. After about a half hour Laurie hears a noise off to her right side about 25 yards or so away. That’s when they hear, and feel a loud chesty growl/ roar emanating from that direction. She said you could feel the vibration of whatever it was roaring at them. It was nothing that either one of them had ever experienced before. The sheer terror of what was happening made every muscle in their body instantly freeze up making it difficult to even breathe. As they sat there frozen in time, the creature started to jump up and down on the pavement. She said it was so loud that you could hear the skin on its feet slapping on the pavement and all the while making this God awful shriek that was directed at both of them. It was almost like this thing was protesting them being there in its territory.

About this time Laurie’s companion pushed her off the hood of the car and said, “GO GO GO”. As she jumped into the car and started to leave she realized that her companion was not inside the car but was stuck outside the door being dragged along side down the hill. At this point she stopped the car so that he could jump in. After getting in they could hear this thing, whatever it was, crashing through the wood and they could hear it pick up and slam down a nearby tree. Then it moved on down the hill away from where they were. After the shock of what they had witnessed they both were shaking and started crying, realizing how close they came to potential danger.