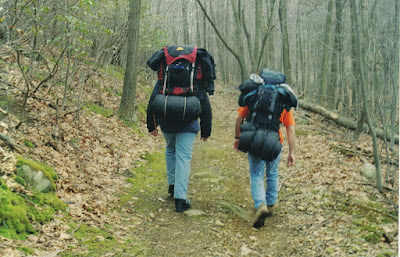 Hikers and backpackers find some crazy things out in the middle of the wilderness sometimes, but these stories are some of the most creepy I've ever heard of. Imagine being in the middle of nowhere and finding a strange message written in the snow, with no tracks anywhere around it. Or finding a person clinging to life with horrible wounds. Check out these 25 scary and creepy stories from hikers and backpackers:

My friends and I found a 22-year-old girl, face down in the mud, both legs broken with compound fractures. she had no cell phone, no water, no food, and nothing to keep her warm. Her friend was dead. A little backstory – my 2 friends and I were hiking in a pretty popular spot in our area. it’s a 150-ft waterfall that takes about 45 mins of uphill hiking to get to.

When we found her, obviously we called 911 and gave her any supplies we had. eventually a helicopter showed up and they flew her to the nearest hospital.

Turns out she was hiking with her friend the NIGHT BEFORE when they both fell off of the waterfall. Her friend must have gone to get help, but unfortunately died less than 100 yds from where we found the girl, so no one knew she was hurt or that she was even there.

It’s a miracle she was still alive and mind blowing to think what she had gone through when we found her 20 hours later.

2. An assailant and an unconscious victim

Roughly eight years ago, my friend and I were walking towards Avenue Street on St. Clair in Toronto. We decided to take a short hike through the ravine below after passing Bathurst. We walked just adjacent to the Loblaws superstore — here’s a Google Map image of the area.

My friend first heard the thudding; with a really squishy sound. I distinctly remember the grunts followed by a single impactful thud. As we cautiously walked through, we came across a large man throwing his entire body weight into driving his foot into an unconscious man’s face on the ground.

My first instincts were to just run, but for some stupid reason, I got between the victim and the assailant. My friend was screaming for me to get away, but while wrestling the guy, I threw my phone at her and told her to call the police.

The assailant tried to fight me, but he was exhausted from the beating he gave the victim. So he took a weak swing at me, turned around, and ran away as soon as he heard my friend talking on the phone.

As I turned around, I couldn’t believe it. The victim’s face was barely human. It was flat, covered in blood, his shoulder / chest area had a large laceration from the top to just above the nipple. Each breath he took bubbled with blood gushing out of his mouth. You could hear him moaning. It was just awful. I didn’t want to risk doing too much without much knowledge of first aid, so I just took off my shirt and tried to cover up the laceration on his shoulder with some pressure.

I don’t remember much of what was asked of me by the police, or how long we were asked to stick around. The victim was quickly taken to the hospital. I still don’t know what happened to him. I like to think he survived, but those injuries were gory.

But it really was traumatizing just seeing someone an inch away from death; much like the girl you found with multiple life-threatening injuries. Those things are very difficult to forget.

The words “Per audacia ad ignotum” drawn in the snow in the absolute middle of nowhere, yet no footprints around them. The words were probably a few hours old. The closest translation we could find was “through audacity towards the unknown.”