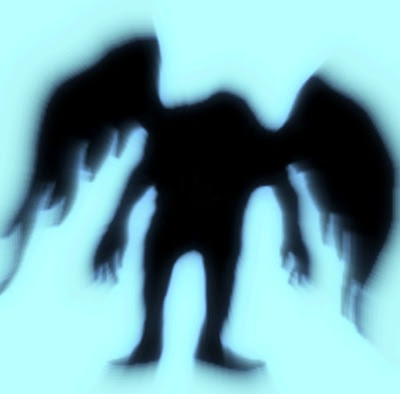 Thanks to Brenton Sawin, I was made aware of this story. A Bigfoot hunter named David had posted a series of videos about his encounters with the creature on his channel 'Something Hairy In The Shadows.' The strangest of the lot was his sighting in 2005 of a Bigfoot flying over Walla Walla, Washington. I have transcribed the video. Make what you want of it. - Jamie Brian

“I was driving home. It was the summer of 2005, July (correction/annotation appears on screen: actually, it was the last week of June). I was driving down the highway. I was in the little Mazda car I had at the time. Out of the corner of my eye, on my right, I, through the windshield, I saw what looked like a giant black bag or something flying in the sky. I was right about here when I first noticed it (points to a spot along highway as he drives – annotation: This is the entrance lane Highway 12 heading North/East from Walla Walla). I noticed over to my side... I didn't pay no attention because I thought it was a black bag flying around. It was right about over there (points to a place over a field). And I looked back at the highway. I was driving. I got up here to the Weigh Station (annotation: Weigh Station 51). Here's the airport over here to the left (annotation: Walla Walla airport). The Weigh Station is right up here. Right after I got around the corner of this Weigh Station, I saw it with my own eyes. It was like humanoid-like. It was human. I think it was humanoid because I discovered this thing was filmed in Mexico a month before. As I was going around this corner right here – this is the Weigh Station, this Weigh Station, I got right here and I could see it right here up in the sky so I pulled over right here. I pulled over right by this guard rail. I got out right here. I stopped right here at this guard rail and it's flying above the wires, going in that direction (east to west). It's flying across the sky like that, just like that (uses a crack in his windshield to show the direction it moved). Anyway, the next thing I did, I got out and I was standing there watching it. It went across the highway and was going across that field and angled towards that hill back there. See that, way back there in the fog? (points towards a field) That one. See how it's higher than the rest of the stuff around it. Next thing I did, I got back on the highway. I raced up here to Sapolil, took a left turn so I could follow it that way. I got around the corner here, took a left turn on Sapolil so I could get in front of it. It was quite the experience. I took a turn right here at Sapolil. I went down the road. As I was driving along here, I got right here and I could see it on my left. It wasn't that far over. It was right over there, oh about, I'd say, a quarter of a mile, half a mile. Probably about a half a mile. I continued on up the road because he was already to this hump already. I'm telling you, he touched that hump of that hill. It glided across the sky and used that hump over here to propel himself. He was heading directly to this silo up here (points toward a silo). In a straight line almost. I got right up here in this intersection. This backroad intersection. I tell you, there's no traffic out here at all. I got to this little four way intersection right here and I stopped. I got out of my vehicle. What I did was I turned around. I did a U turn. I stopped right here. See the silo? He was coming right across the sky. He came at me. After my first stop back there on the highway, I could tell it was floating on some sort of triangular device. It looked like red hippity hops, and I said this before online a dozen times. And I'm not crazy, I know what I saw. Anyway, I got here, I got out of the vehicle here at Sapolil, he was, I would say, 50 yards away. He got right up to about 50 yards away. I would say he was 20 yards off the ground at the max. And he turned and he started going off at that angle. I tried to follow him. I went down the road that way but he went behind the trees back there and he went right up over between those hill tops there, that one and that one (points at a hill and some trees). And he disappeared back in there and, mind you, the airport way back over there, so, I don't know, something strange going on around here. I got close enough to see this thing I got close enough to see this thing and I watched a lot of the Patterson film and I watched a lot of Sasquatch films and I know what I saw. And you know what, I think it's military because I saw a cinch like seam on his leg that made it appear like he was wearing boots.

Some of the details I forgot to tell is when I stopped on the street it had something hanging from the side that I thought was a dead dog. When I reached Sapolil and Smith road, I was pretty confident it was a small dog. It was a dead dog hanging on a rope about 3 or 4 feet long. It craned it's head at me when it turned and floated across the sky away from me, it turned it's head like an owl. I mean, it's head stayed fixated on me as its body turned. I saw plenty of hair. I saw its face.