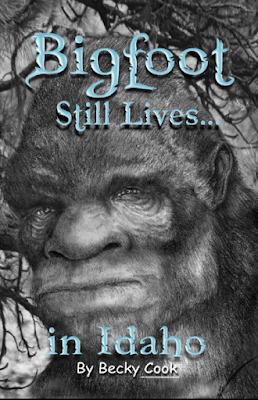 Becky Cook, author of "Bigfoot Lives in Idaho" has recently released her second book, "Bigfoot Still Lives in Idaho". Catchy title. According to Cook, bigfoot lives in Idaho. Her books collect various bigfoot encounters around the state that people have told her, and her interest started with a story her grandfather told her when she was very young.

Becky Cook’s fascination with Bigfoot started after hearing about an alleged incident on the Shoshone-Bannock Indian Reservation when an angry Bigfoot reportedly tried to knock a single-wide trailer off its foundation.

The Bigfoot was pounding on the trailer, and its occupants didn’t have a phone. They waited until the Bigfoot wandered around to the back of the trailer before bolting from the trailer and sprinting for a nearby police station. When they came back with a couple patrol cars, the Bigfoot had destroyed the trailer’s pumphouse.

Cook, who was born in Blackfoot and now lives in Idaho Falls, says she was 4 or 5 when her father told her that story. Growing up on the reservation, Cook, who now lives in Bonneville County, would hear tales of Bigfoot sightings and encounters from all over Southeast Idaho. She also loves to write. As a freelancer, Cook has had hundreds of articles appear in newspapers and magazines all over the region.