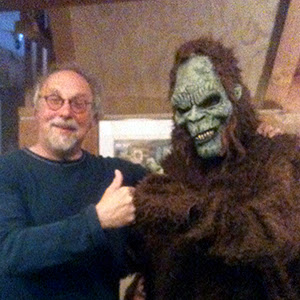 David George Gordon is an author with several books to his credit, the latest being The Sasquatch Seekers Field Manual, which helps researchers go about their task in a scientific way. This is an interview with Gordon about his philosophies and bigfoot:

Q: You state that we need Sasquatch more than he needs us. Why?

A: We need a wild man of the woods.

Q: It seems to be a recurring theme in so many cultures.

A: Even if you look at the Bible, there’s a whole part about refined people and the not-so-refined, the hairy man basically. We need a non-human human to compare ourselves to.

Also, just to keep ourselves happy, we need to think there’s unexplained wildness in our world.

Q: With all the people, at least twice as many since the 1950s, here in Washington, each with an easy-to-use high-resolution camera in their hand, why haven’t we seen a clear, sharp photo of a Sasquatch?

A: There was a team of field biologists that went out in the North Cascades, looking for grizzly bears. Grizzly bears were entering Washington from British Columbia. They found scat, footprints, clawed trees but never saw a grizzly over five years.

So if an 8-foot-tall grizzly can avoid humans I don’t see why a large primate could do that even more so.

Q: There are many sightings of Bigfoot in pop culture — more every day. What do you think is behind this sudden resurgence?

A: A large part of that I attribute to the Internet. Before that it was a lot of lunatics out there in flannel shirts. What I call the “I-Seen-Ums” people.

Now there are all websites like the Bigfoot Field Researchers Organization where people post sightings and are very much more connected through the internet. More and more people are watching those (reality) shows.

Q: And cryptozoology tourism, where people take trips to look for animals that may or may not exist, is a real thing.

A: That’s right. If I was younger and had it together, that’s what I would do: a local Bigfoot museum and enjoy a life selling Bigfoot hats or something.

Q: Your book discusses scientific nomenclature and the Linnaean system of naming species, which usually involves producing a dead subject to study. Is it legal to kill a Sasquatch?

A: It is legal, but not too ethical. Except in Skamania County, which passed a Sasquatch protection ordinance in 1969 (amended in 1984).

Of course, a species can be described from remnants of remains. Dinosaurs have been described from incomplete skeletons. Gigantopithecus is known from some jawbone material and a bunch of teeth.

In other words, you don’t need to produce a corpse — just enough pieces for scientists to examine.

Q: The Puyallup and Nisqually tribes told of a Bigfoot living in the area called Tsiatko.

A: Yes, a lot of tribes across North America did. I find that fascinating.

Q: What is it about the Pacific Northwest that makes good Sasquatch country?

A: We have these vast tracks of untraveled wilderness, even today. A large part of the state is the Olympic National Forest, which is not very populated with observers. And large parts of British Columbia is unsettled. So, there’s still a lot of opportunity for wildness.

But we are the only species that walks on two legs — unless you include Bigfoot. Is he some sort of proto-human, or man-ape?

A: The descriptions of it are all over the place and have changed over history.

In earlier descriptions it was much more gorilla like, more caveman like. As far as I know it could look like an armadillo but walks upright on two feet. Some descriptions say it has reddish hair, others black hair and others white hair.

Q: The final part of your book suggests day hikes that might yield a “squatch” sighting. You suggest Johns River near Hoquiam and Lake Sylvia near Montesano. Where else?

A: Sightings have been all over the place, including a subdivision in Bellevue. So, you don’t have to go way out. There are more reports of people seeing them near hot springs.

Q: Let’s assume that these hikes are going to be Sasquatch-free. What else can the nature-loving Pacific Northwesterner glean from them?

A: I worked at Point Defiance Zoo and Aquarium in the 1980s. I used to go out tide pooling in the winter at night. I would shine a spotlight on a starfish but I’d find other things as well.

I feel like (I’m) sending people out into the woods on a mission (where) they’re going to see more (than just what they are searching for.) Even if you don’t see a Sasquatch, you’re going to have a better time on your adventure — just having that purpose.