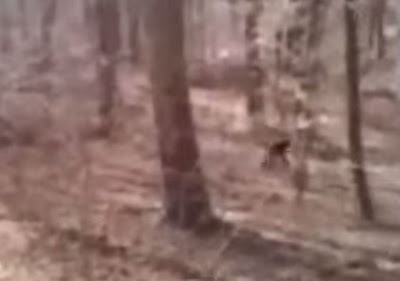 Wow! This is the first time we've come across this clip. Thanks for Daniel D. for posting this video on our Facebook page. If you're wondering why it's titled, "Tornado" sasuqatch, Daniels explained that it was a probably a sasquatch displaced by a tornado. He writes:

Here are some reasons I really like this video. The subject of this video is really little unlike most videos. It runs in a quadruped motion before switching to a biped, and it moves really quick on all fours, even having a rolling motion. It looks natural. I've read other accounts of people seeing juveniles start out on all fours and transition to two legs. It has an exaggerated arm swing which follows other descriptions of sasquatches when they are moving quickly. People don't swing their arms out that far when running. The bipedal gait doesn't look like a human's either.

He sees the subject before it screams, and he almost exclaims simultaneously with the scream. Again, the scream and other actions of this small juvenile are consistent with sasquatches and perhaps difficult for some person to be emulating.

Most sightings are over so quick, over in seconds, that by the time someone can pull a camera out and get it ready, even if they can think that fast, the sighting is over. The fact that his person was out filming the aftermath of a tornado provides a plausible excuse for catching it on film, and it also provides an excuse for a juvenile to be separated from it's parents, possibly due to the tornado.