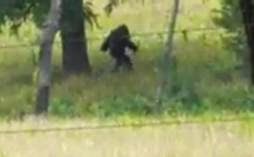 A man from Texas claims that he and his mother witnessed multiple bigfoot creatures, one of which apparently got on the roof of their home. The following day the man returned to the property and saw multiple creatures, some of which were on all fours.

“I saw what appeared to be a very large orangutan,” he recalls. “It was on all fours and viewed me, rocking back and forth, from behind a cedar tree. It would lean out, then lean back behind it again. It then looked to its left and then, slowly, rose up to a height of 8 or 9 feet… it then gracefully walked with both arms swaying to its left and lowered again near the ground. That is when I saw a second one behind it.”

And as the two animals “rocked back and fourth and occasionally”, they would look at one another and move their mouths, as though they were communicating."