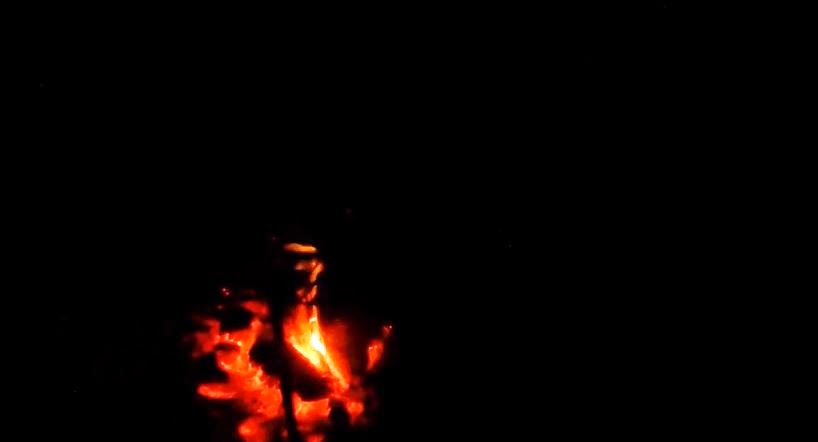 You'll want to put on your headphones for this,. Lord Rick has had rocks thrown at him around these woods. Though most of the time ,it's just him scaring himself, things are different this time. You can actually hear a "scream". Could it be wolves or coyotes? Who knows. Rick explains:

Your sitting there listening to the crackling of the fire sometimes its to quiet then you hear something your trying to make sense of. The moon is not out and earlier you were trying to do Sasquatch vocalizations. Then all of sudden you hear what sounds like to strange vocalizations as if some hunt is taking place then you hear the scream of something being taken down. I had reacted as quickly as I good turning on the cam and you could hear more vocalizing. Tammy believes they are coyotes but I never seen them in the sierras or heard them on my journeys so it was odd. On the west side of the lake if you work your way out of the basin over the ridge is a very remote canyon that runs parallel with the lake. I integrated some photos of a case I worked up in NW Pa.of some animal mutilations we found in this one general area our team had a bigfoot sighting. I have to say I did find some coyotes that were mutilated I believe that Bigfoot may find them to be a nuisance along with the carcass of a small dog. In any case I try to keep an open mind we are in the forest you have many animals such as cougars, black bears, wolves, deer and even cattle. But what I recorded and heard at least what I could get was very odd then again during the day I heard similar vocalizations and seen a bipedal creature hide behind a tree. This should send some chills down your spine animals or monsters it gives me great pleasure to be able to share my experiences with our viewers and spook Tammy a little. Even though she believes they are coyotes she still shows great concern that making Bigfoot calls is not a good idea because she believes that these creatures are not nice. Anyhow it gets better because later in the morning when the sun came up my son seen a bipedal creature across from the lake that lumbered off after tree banging. I definitely think that the expedition was a success we found so many oddities but come on out listen to some tales and strangeness around the campfire.