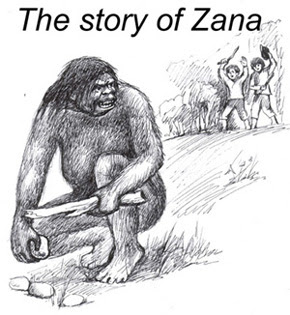 For hundreds of years, Russian Almasty hunters have believed that Zana, a captured Russian "Bigfoot", could be a surviving Neanderthal, the human-like species that is thought to have died out tens of thousands of years ago. In a groundbreaking new study by Dr. Bryan Sykes of Oxford University, that Neanderthal theory may be correct. This Sunday, on Channel 4's (U.K.) special documentary, The Bigfoot Files, Dr. Sykes is set to unveil the true origins of "Zana". Here's the report via Channel 4 News:

A leading British geneticist, who recently found the DNA key that could answer the mystery of the ‘Yeti’, has now solved the riddle of Russia’s own Bigfoot, ‘Zana’.

Bryan Sykes, Professor of Human Genetics at the University of Oxford, has carried out DNA tests on saliva samples taken from descendants of Zana - a so-called ‘wild woman’ captured in the late 19th century in southern Russia, who local people believe was an ‘Almasty’.

Professor Sykes’ research (part of a worldwide analysis of alleged Bigfoot samples), has yielded a remarkable result: that Zana's ancestry was 100% Sub-Saharan African and that she was most probably a slave brought to the region by the ruling Ottomans.

His findings feature in a new Channel 4 documentary series, Bigfoot Files (November 3rd), presented by Mark Evans, who is on a global quest to unlock the real story of Bigfoot.

Zana’s story is extraordinary. She is said to have been captured in the forests of Abkhazia, a remote part of Russia’s Caucasus region, in the 1870s. Imprisoned, it's said, for two decades by a local landowner, she was described by eyewitnesses as being ‘very big, strong, her whole body covered with hair’. Chillingly, Zana had four children with local men.

Russia's 'Almasty Hunters' have been obsessed with her story for over half a century and have always believed that Zana could be a surviving Neanderthal, the human-like species that is thought to have died out tens of thousands of years ago.

To answer the riddle and establish what species she belonged to, Professor Sykes has tested samples from six of Zana's living descendants. He has also recovered DNA from a tooth taken from the skull of one of her sons, Khwit. Such work is highly specialized and Sykes was the first geneticist ever to extract DNA from ancient bone.

The results are complex and fascinating. First, they show that Zana was, in fact, no more Neanderthal than many of the rest of modern humans. When the Neanderthal genome was sequenced in 2010 it became clear that Europeans and Asians contain around 2 to 4% of Neanderthal DNA; almost certainly the result of interbreeding.

But the big surprise in Sykes' results was that Zana's DNA is not Caucasian at all, but African. Khwit's tooth sample confirms her maternal African ancestry and the saliva tests on the six living descendants show that they all contain African DNA in the right proportions for Zana to have been genetically 100% sub-Saharan African.

“The most obvious solution that springs to mind is that Zana or her ancestors were brought from Africa to Abkhazia as slaves, when it was part of the slave trading Ottoman Empire, to work as servants or labourers,” says Professor Sykes. “While the Russians ended slavery when they took over the region in the late 1850s, some Africans remained behind. Was Zana one of them, who was living wild in the forest when she was captured?“

But that theory would not explain her extraordinary features, described by reliable eyewitnesses. There is an even more intriguing alternative theory. Having carefully studied the skull of Zana's son, Khwit, Professor Sykes believes there are some unusual morphological skull features – such as very wide eye sockets, an elevated brow ridge and what appears to be an additional bone at the back of the skull – that could suggest ancient, as opposed to modern, human origins.

And Sykes has raised the bold theoretical possibility that Zana could be a remnant of an earlier human migration out of Africa, perhaps tens of thousands, of years ago. If correct, Zana could be evidence of a hitherto unknown human 'tribe', dating from a distant time when the human species was still evolving and whose ancestors were forced into remote regions, like the Caucasus mountains, by later waves of modern humans coming out of Africa.

One of the Russian Almasty hunters, Dr Igor Burtsev, offers testimony in the Channel 4 documentary that may back this theory up. He unearthed Khwit's skull in 1971 and a few years later, showed it to a group of anthropologists in Moscow. They were, he says 'amazed', and identified a mix of 'primitive' and 'progressive' (modern) features in the skull. Lacking the scientific tools at Sykes' disposal, they could take it no further. Now Sykes is able to propose the theory with some confidence.

It is only a theory at this stage - and a bold and speculative one at that. But Professor Sykes intends to study it much further before reaching his final conclusions.

Zana’s story will feature in Bigfoot Files on Channel 4 on Sunday, November 3rd at 8.00pm. In the programme Mark Evans also meets former heavyweight boxing champion of the world, seven foot tall Nikolai Valuev, who admits to having a bit of a Neanderthal look himself. He is now Duma Deputy (the equivalent of an MP) for Kemerovo in Siberia and fascinated in Almasty. The programme also investigates some of the other claimed sightings of the creatures in Russia.

The series, made by Icon Films, examines the stories behind famous Bigfoot sightings and Mark Evans meets people who believe passionately that other species of hominid exist. A book by Professor Sykes about his research The Yeti Enigma: A DNA Detective Story will be published by Coronet in Spring 2014.

The programme is available to view and there are images available.