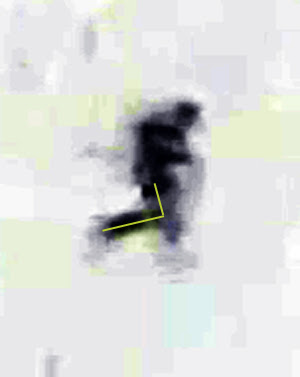 Did Stacy Brown Jr. and his father film a Bigfoot in Florida? On last week's Finding Bigfoot episode, the team traveled to Florida to investigate the Brown thermal footage. Cliff Barackman has released his field notes on the investigation and here's what he wrote about the footage:

For much of the footage, the figure is hiding behind a tree. It seems to be peering out from behind this tree, probably watching the two men as they stood on the nearby trail just over 120 feet away. It shifts its weight to the left foot, which is slightly away from the trunk of the tree, and steps out with its right foot while still touching the tree with its right hand. One very long step puts the creature nearby a stand of trees and bushes, behind which it disappears never to be seen again. This fleeting glimpse of the creature is brief, but more than enough to distinguish its shape from any other known animal in the woods. It can only be a human or a sasquatch.