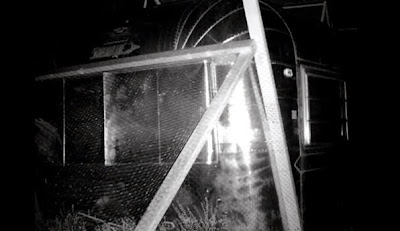 Oh, heck. It's almost that time of year again, and in the true spirit of Halloween, this trail camera footage from Arizona Bigfoot researcher Mitch Waite is pretty spooky! Waite says the owners of this property have been hearing some strange things lately, so they decided to set up a camera on the trailer and caught this ghostly image on video. Waite writes:

We investigate a trailer in the rural area of Show Low Arizona. The owners report knocking on their trailer that starts at the back of the trailer and moves forward at about 3am every morning. Then it sounds like something is climbing up an down the chicken wire that was used to create a house cat run (enclosure). We put game cameras on the trailer to see what was knocking on the walls. As of this uploading, I am sitting in the trailer listing to the knocking and became very ill to the point of nearly passing out of consciousness. Something strange is afoot! The investigation continues.


[Update] This update was posted 17 hours ago on Facebook. Waite writes: "Just sitting here in the middle of no where in travel trailer (not mine) listening to something going up and down the trailer knocking on the walls. When I was first told about it, I thought it was a raccoon or skunk, but no animals have been seen. We put out game cameras last night and we did hear the knocking. Today we pulled the SD cards and to our surprise, there was no animals. Just what appeared to be electric discharges on the chicken wire that makes up a cat run in the front of the trailer. There is no external power out here. No telephone lines. No trees near the trailer. No nearby neighbors. But there goes the knocking again."