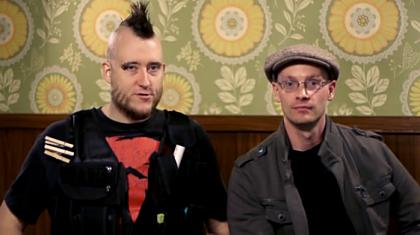 If you're one of those people frustrated with "Finding Bigfoot" not ever finding anything, perhaps these newcomers may be able to satisfy your hunger for Bigfoot evidence. The Squatch Watchers is a web series about a team of Bigfoot believers searching for the elusive beast -- hoping they'll be the first to provide proof. According producers of the show, "no rock will be left undisturbed" until they declare an area is free of any Bigfoot. They're currently running a Kickstarter campaign and if you want to be included in the credits, check out their page here: www.kickstarter.com.

The trailers are below:

So, wait? Is this fictional?

No! The Squatch Watchers are comprised of real people and the series will document our search for Bigfoot. The first season will comprise of five episodes with a running time of around ten minutes each. Each episode begins with the team arriving in a new area of California and extensively searching it for any sign of Sasquatch. Local residents will be interviewed; scientists will be consulted to ensure the validity of this search. No rock will be left undisturbed until we declare an area is free of any Bigfoot.

Why are you looking for Bigfoot? Aren’t there TV Shows that do that?

We’re all big believers in Bigfoot. Sadly, television is doing a poor job of actually performing a real search. Most “monster” shows will show up in an area, and then leave that area without finding anything or even making any determination at all! WE WILL NEVER DO THAT.

We’re not a television show that wants to keep the mystery going. We want to solve it. Now, this doesn’t mean that the show will be boring. No sir! We are internet comedians after all. Each episode will be the perfect 50/50 mixture of comedy and actual Bigfoot hunting.