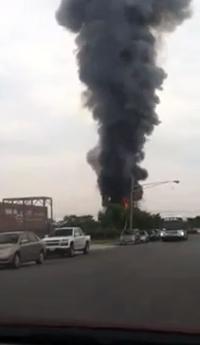 Earlier today, a train derailment northeast of Baltimore caused a massive explosion that was seen, felt and heard for miles around. According to the Baltimore Sun, The National Transportation Safety Board announced at around 4 p.m. that it was sending a "go-team" that includes rail and hazmat investigators:

Baltimore County spokeswoman Elise Armacost said the train was carrying unknown chemicals but said the smoke did not include toxic inhalants. Still, a 20-block area around the accident was evacuated.

"The evacuation would be much more significant if there were toxic chemicals," said Baltimore County Fire Chief John J. Hohman. He said he expected the fire to burn into the night, and firefighters were huddling with CSX officials about how best to attack the blaze.

A voluntary evacuation was in place for residents of 62nd, 63rd and 64th streets west of the crash site. The Rosedale Volunteer Fire Company was open as a shelter.
Only two people were aboard the train, and they were uninjured, Armacost said.

Here are two cellphone videos uploaded to YouTube by witnesses: