Response To Dr. Matthew Johnson's "A Question About The 'Nephilim/Bigfoot' Theory" 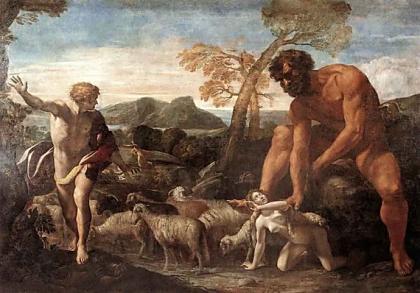 Editor's Note: Chad Miles is a former contributing editor for Defense Watch Magazine and former contributor to The Michigan Journal. He appears weekly on The Bruce Collins Show which airs on the Fringe Radio Network discussing current events and conspiracy theories from a Christian perspective.

The concept of the Nephilim has gained much attention within the Bigfoot community over the last few years. Many people are marginally aware of the concept of these beings, but are quite unaware of the history or the details behind these creatures. As a result Dr. Matthew Johnson had a few questions regarding the Biblical beasts.

The first mention of the Nephilim is in the Old Testament book of Genesis starting in chapter 6.

There were giants (Nephilim) in the earth in those days; and also after that, when the sons of God came in unto the daughters of men, and they bare children to them, the same became mighty men which were of old, men of renown. (Genesis 6:4 KJV)


So, the idea here is that angels left their heavenly realm (see also the New Testament book of Jude chapter 1 verse 6) and procreated with human woman. This event produced offspring that were large in stature (giants) and notorious for their deeds. Many people think that this is the only mention of the Nephilim in the Bible, but they are wrong. Giants are also mentioned later well after the flood of Noah. We have all heard of Goliath in the Old Testament. Standing around nine feet tall he is without a doubt the most well-known Nephilim. The Bible also speaks about giants occupying the land of Canaan before the Hebrews come to take over the “promised land.”

So, let us address one of Dr. Johnson’s questions about how non-corporal beings can reproduce with human women. Admittedly, the Bible does not go into detail about how they were able to do this. Even the non-canonical Book of Enoch, which explores this event in much greater detail, does not give us any more insight into the biology of the event.

Interestingly, there is a rather obscure Ethiopian religious text called The Kebra Nagast that gives a possible clue as to how this may have been possible. This book, like the Book of Enoch, is non-canon as well. In chapter 100 there is an account of some angels who are gathered together to petition God over their grievances of Adam. Basically, they are jealous and angry that Adam had been given some sort of special status that they do not have. God tells them that they could not handle being men (of flesh and blood). They claim that they can and challenge God to give them the same body that Adam possesses. God warns them one last time before he gives them human bodies, but then he does so. As soon as they obtain a physical body they are “off to the races” so to speak.

And straightway there were given unto them with His word flesh, and blood, and a heart of the children of men. And they were content to leave the height of heaven, and they came down to earth… And the men did not restrain themselves for a moment, but they took to wife from among the women those whom they had chosen, and committed sin with them. (Kebra Nagast, Chapter 100)


This is only one possible explanation of how this could have happened. Like Bigfoot itself, it still remains a mystery. Although the Bible does allude to the fact that angels can take on human form many times (see Genesis Chapter 18 and Hebrews 13:2).

Interestingly, the Jewish historian Flavius Josephus mentions the Nephilim in his work Antiquities of the Jews providing some evidence outside of the Bible for the existence of these giants.

For which reason they removed their camp to Hebron; and when they had taken it, they slew all the inhabitants. There were till then left the race of giants, who had bodies so large, and countenances so entirely different from other men, that they were surprising to the sight, and terrible to the hearing. The bones of these men are still shown to this very day (Book 5, Chapter 2)


Aside from the question of the origin of the Nephilim, let us look at the profile of attributes that these creatures possess.


These are the same characteristics that Bigfoot or Sasquatch seems to possess as well. If we look at the Native American traditions of the Sasquatch and disregard the North American ape theory the template fits even better. There are many mounds and other structures around the world that legend tells us were built by a race of giants. When you combine this information with the many giant human like skeletons that have been discovered early in American history the evidence points away from an ape like creature and toward something entirely different. I believe that is why many people like to use the Nephilim as a possible explanation for this mystery. Until we know more, it looks like a pretty good fit to me.