Editor’s Note: Dr. Matthew A. Johnson is one of the most credible people in the Bigfoot world. In July 1, 2000, Dr. Johnson had a "Class A" Bigfoot encounter with his family while hiking near the Oregon Caves. After his life changing sighting, he went to the public and described one of the most intense encounters ever. You can join him on Facebook at Team Squatchin USA.

Fear sells medical products (i.e., You need this pill or surgery or you won't be happy and healthy).

Fear sells cars (i.e., Our car withstands the crash tests. If you love your family, you will buy our car).

Fear sells Animal Control (i.e., All Pit Bulls are dangerous and need to be put down).

Fear sells alcohol (i.e., You won't have any fun and/or these sexy women at your side if you don't drink our particular brand of alcohol).

Fear sells Flat Screen TV's (i.e., Don't be caught without our Large Flat Screen TV on Super Bowl Sunday. Hurry up! Get down here and buy one before they all sell out!).

Fear sells political candidates (i.e., The Republicans want to throw your grandmother over the cliff! The Democrats want to turn the USA into Communist China).

Fear sells gun control legislative acts (i.e., Ban all guns or all your kids will be shot to pieces).

Fear sells Global Warming legislation (i.e., Stop manufacturing and using all of these products and cars because we are turning our planet into an oven).

Fear sells Peer Pressure to kids (i.e., Drink and smoke pot or you won't be a cool kid like the rest of us).

Fear sells Obedience to kids (i.e., Behave or you'll get a spanking! Don't leave the village or Bigfoot will get you!)

It's amazing to me how so many people want to buy into the possibility that Bigfoot is some nasty, mean spirited, demonic Ape-Man who is willing to abduct, assault, rape, kill, and/or eat any human that dares to wander into the forest.

Really??? What about all of us who have spent 10 to 50 years out in the woods, Researching and/or Habituating with the Squatches and have NEVER been abducted, assulted, raped, killed, or eaten? What about this very important and relevant data?

Guess what? There's been absolutely no one who's been abducted, assaulted, killed, or eaten by the Bigfoot family dwelling in the greenbelt behind our home. NONE! NADA! ZILCH! ZERO!

I recently posted an article on "Bigfoot Paranoia" in over 20 Bigfoot FB groups. NOT ONE PERSON reported knowing any family or friends who had been abducted, assaulted, killed, or eaten by a Bigfoot. None of them reported that they had been abducted or assaulted by a Bigfoot. Yet, all of this very important and relevant data is ignored by the BIGFOOT ALARMISTS because Fear sells. Always has and always will.

What do we do about it? Simply remind everyone about the TRUTH of the matter. The Bigfoot/Forest People are intelligent, docile, and private beings. They fear humanity for a very valid reason. We tend to shoot up and blow up anything we don't understand. We remind people about how much time Researchers and Habituators spend in the woods without ever being harmed. We remind people that if the Bigfoot scream, pound their chest, stomp on the ground, or chase you out of the woods, they still never harmed you. Did they? Nope! They were simply using intimidation tactics to get you to leave their home because you were trespassing. If they allow you to visit in their home, it's because they're curious about you and/or they trust you.

The bottom line is "The only thing we have to fear is fear itself...... and spiders. Always fear spiders!" 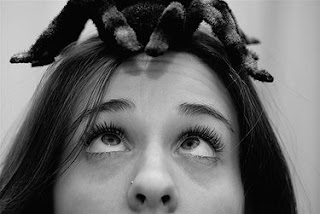