Watch this: Giraffes Fight To The Death In The Kalahari Desert (Updated: Video now works) 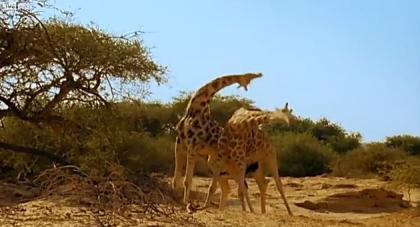 This clip is from the BBC's current wildlife documentary series "Africa", narrated by David Attenborough. This is probably one of the most intense animal fight scenes we've seen in a while. It's a classic battle for the alpha male status as the older male is challenged by another ambitious male. Few alphas stay on top for very long, and this old male almost lost his crown in this battle to the death.