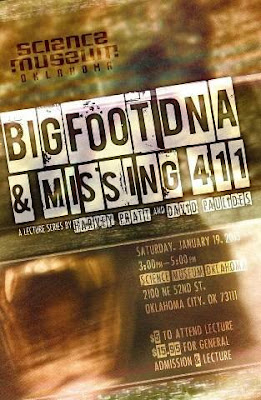 Editor's Note: This is a guest post by Tammy Murray, co-host of Team Tazer After Hours and founder of Sweet Sassy Glassy Art.

Imagine my joy to hear that there was going to be a lecture about Bigfoot DNA at the Science Museum of Oklahoma on Saturday, January 19th, 2013. And that it would only cost $5 to attend. Being invited by my good friend Amy Hurley made this an offer I couldn't refuse.

We were greeted by a long line of people waiting to get in that share the interest and curiosity of the mystery of Bigfoot. I estimated the attendance was around 250.

The lecture started out with Harvey Pratt. An American forensic artist and Native American artist, who has worked for over forty years in law enforcement, completing thousands of composite drawings and hundreds of soft tissue postmortem reconstructions. He shared many examples of his drawings from witness descriptions of Bigfoot. He also referred to Bigfoot as a “Tribe of Humans”.

David Paulides was the second act of the lecture. He opened with a history and credibility of his organization, the North America Bigfoot Search (NABS), whose purpose is to prove Bigfoot exists with scientific proof, as well as his involvement with MUFON (Mutual UFO Network).

His presentation began by explaining that the NABS was the only Bigfoot research organization that required a signed affidavit from witnesses to insure they are being truthful by accountability. Then things got weird when he talked of a person that saw a rectangular window open out of thin air and a Bigfoot step out of it, as well as orbs and other phenomenon, and that we should be open minded.

He spoke of the Melba Ketchum DNA “White Paper” which had been submitted and that when it was published we would all be amazed at the results. There were 110 DNA samples collected and the results were going to show the world that Bigfoots are like humans.

At the end of the lecture, Paulides invited questions from the audience. Of course, I had to ask if any of those samples were from the Sierra Kills. The answer was, “Yes”. I also asked if they were from the same sample that recent test results proved were from bear with human contamination. He said, “No”. He also said that Smeja had lied to the authorities and was in fear of being arrested at any time.

After the Q & A there was a book signing table and I felt compelled to ask if the sample they had that showed human hybrid DNA was from the Sierra Kills “Bigfoot Steak”. The reply by Paulides was in a very defensive and harsh tone. He told me that Smeja sent a piece of flesh from a bear he killed to an alternate testing site to cover up for the lies to the authorities. But the sample that they had and still have was not bear.

A phone call I made to Justin Smeja got this response: “Paulides’ comments are idiotic and moronic and are absolutely ridiculous.”

From Bart Cutino: “Paulides has never met Justin Smeja to make that accusation. I know he has never had a fear of being prosecuted and initiated contact with the California Department of Fish and Game to do a formal interview and allow them to test the tissue and they were not interested.”

So, in conclusion, I am somewhat surprised that the Science Museum of Oklahoma would host a lecture with unproven theories and so heavily laden with biased opinions and obvious contempt for others involved in Bigfoot research that disagree with their conclusions and public statements.

[Update] Here's my response to David Paulides' blog post about my article this morning.