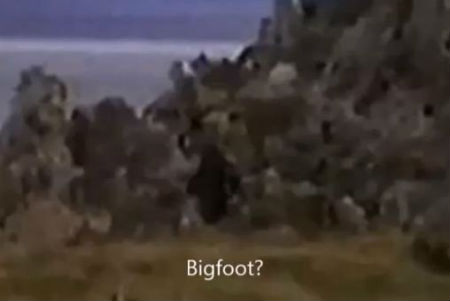 Back in 2008, a science teacher from Orange County, California came forward and presented to the Bigfoot community one of the most intriguing footage of Bigfoot they had seen in a long time. The teacher said his family had viewed the vacation video privately for almost 20 years-- not knowing he had captured a possible Bigfoot until his daughter pointed it out to him. The home video was taken in 1991, around Mono Lake, near the base of the Sierra Nevada Mountains. In the video, a large, hairy, upright figure can be seen walking between two rock formations near the shore.

Investigators suggest that the figure in the video shows either a Bigfoot, or someone in a Bigfoot costume. According to the BFRO, if it was a person, it would have been someone who was wearing a large, full-length brown fur coat with excessively long furry sleeves.

The witness submitted his report to the BFRO on May 9, 2008 (17 years after filming the creature). Based on his credibility as a high school science teacher with absolutely nothing to gain by releasing the tape-- the BFRO believes the film is authentic:

He is a science teacher at a high school in south Orange County, California. He has no incentive to fake this footage or to involve his family in an elaborate prank.

The profile of the cameraman, combined with the random circumstances of the videotaping, strongly suggest this is not a man in a costume -- not a hoax.