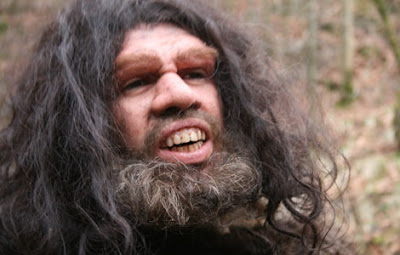 A man in Florida just submitted a report to the BFRO after watching Finding Bigfoot and wrote about an encounter he had with Bigfoot while frogging the day after Thanksgiving (November 23, 1990). According to the report, the man's life changed forever when he locked eyes with a Neanderthal-looking man slinging mud at him in his airboat.

Here's the raw report written by the witness:

OBSERVED: I was flipping threw the channels last week watching some late night TV when I saw a program called Finding Bigfoot.It brought me back to the day my mind about that giant changed for me.I only told my mom what I saw.It really changed my life about the unknown.I was running my airboat on the upper St. Johns River doing what I like to do best frog gigging on a Friday night. It wasnt the first time I was out on the river at night,I use to run the north and south parts of the river all the time.I still do just at night I make sure I have a running buddy with me.Anyway I was coming up on the oak's.The oaks are located right next to Duda's property.Just a wee south of Lake Winder. I figured I would pull up into the oakhead and drink a few cups of joe before I started to gig.Out of the corner of my eye I saw something bolt into the cabbage palms.I figured it to be a hog,I really did not know what it was the last thing on my mind was it could of been the big guy.Anyway I ran up on dry ground about 15 yards spun my boat around so it was pointed toward the river and shut it down.I just poured a cup of joe when I herd something about 10 yard behind me.It sounded like it was wrestling with a cabbage palm.Or maybe rolling around in a bunch of palms.Then out of know where I herd a thump right next to me boat.I looked but did not see anything then again I herd it behind my boat then something hit my rudders I turned on my head lamp and saw mud on my rudders I then saw a bunch of mud fly over me and hit my bow I shined my light in the direction of where it was coming from and I saw his face.I lost all feeling in my body I just about passed out I was lost I didnt know what to do.I was in total shock.I just about peed my pants I was so scared.I never in my natural born life moved so fast to crank my boat and got the heck out of there.I almost sank my boat when I hit the river. I just went north knowing I would be in the lake.I was scared to drive home so I parked in the middle of Lake Winder and took a few sips of drink to calm my nerves and try to talk my self out of what I saw,I stayed there untill first light.When I got home I went and seen my mom and had to tell her what I saw. I told her the story because it scared me so.I am a man and I am tuff but that scared the living heck out of me.I figured I should share my story just like others are on that tv show.

I spoke with the gentleman for several hours. Although this encounter happened in 1990, he remembers every detail. He claims this encounter changed his life forever. The gentleman has worked at the space center for over 20 years and has gone frogging every Friday night on his airboat even longer. On November 23, 1990, around midnight, he took his airboat to a familiar oak hammock north of Lake Washington and south of Lake Winder on the St. Johns River.

He backed his airboat in as usual, to prevent any other boaters that might come by from blocking him in. He turned off the engine, and while still sitting in his chair, poured himself a coffee. Within a minute’s time, he heard two “plops” that came from the front of his boat. Then he heard a “plop” hit the rudder behind him. He turned on his headlamp to investigate the noise. He noticed mud on the rudder. As he was trying to figure out where the mud came from, another clump of mud went sailing over his head, going through his light beam and hitting the rudder. He quickly turned to see who was throwing mud, and from behind a group of palmettos, standing 30 feet from him was a huge, dark-haired “Neanderthal” staring at him.

They “locked eyes,” looking at each other for several seconds. The witness claims he was so frightened he couldn’t move. He thought how sometimes his engine takes a few times to fire, and he was concerned he wouldn’t be able to get away fast enough. To this day, he doesn’t remember starting the engine, but does remember that once it was started, he “torpedoed” out so fast, he swamped the boat and almost sunk it.

He drove the boat to the wider part of the river, up to the next lake where he remained in the middle until sunrise. He didn’t want to go back down the narrow part of the river for fear the creature might jump on the boat, or grab him as he sped by. For several hours he remained in the middle of the lake, shaking, and trying to talk himself out of what he had just witnessed.

When telling his story, the gentleman was overcome with emotion, and had to stop and begin several times. I cannot emphasize how passionately credible this man is in retelling this encounter some 20 years later.

Although, he only saw the creature for several seconds, he was able to give a detailed description of what he saw. What he saw, ‘is burned in my memory forever;”

-It was more “Neanderthal” than ape or human-looking.

-Its dark brown body hair was darker than its “dark blond” facial hair.

-The shoulders were “as wide as a small pick-up truck.”

-There appeared to be no neck.

-There wasn’t much hair around the checks or eyes, but it seemed to have an 8 -10 inch beard.

-The head was not conical, but very large and oval.

-Facial skin was not black, but darker than tan, and “leathery looking, ruff-like.”

-There was a brow ridge.

-The hair was not tangled or matted.

- It had black eyes, and thin lips with a large mouth.

The witness continues to go out on Friday nights, but will not return to this particular place. He has agreed to take me out to this oak hammock during the day. I will update this report if need be.

Photo taken on this hammock in the swamp, to give you an idea of what the trees/woods look like in the area. 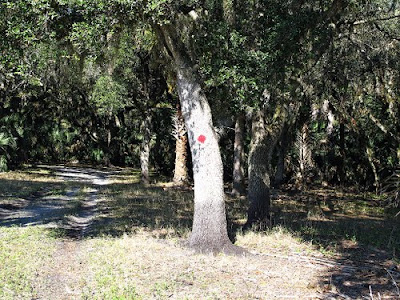 The St. Johns River Management Area that runs through three counties is remote and marshy, with many cypress and oak hammocks. Abundant wildlife exists here year round. Several BFRO reports are currently being investigated in or around this management area.