On October 20th in Felton CA, Mike Rugg Will Turn The Bigfoot Skeptic World Upside Down 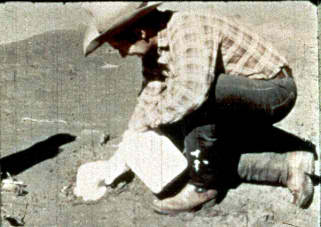 Mark your calendars and please plan to attend the October 20th Bigfoot Discovery Days V with Mike Rugg, Lenny Green, Bill Munns and the recently unearthed: Roger Patterson Reel One touring film along with the FULL Patterson/Gimlin footage. The reel hasn't been viewed publicly since the 1970s and it supposedly contains gems like witness interviews and Patterson pouring Bigfoot cast. It has now been converted to DVD and will officially be revealed.

So, how is it going to turn the Patterson-Gimlin skeptic world upside down? According to Bill Munns, because of the discrepancies between the known scene of Roger casting a track, and the scene showing Roger holding two casts by a tree, skeptics have been using the discrepancies to support their claim that Roger Patterson and Bob Gimlin hoaxed the greatest film in Bigfoot history. The new film will show that there’s no connection between the two film scenes and prove that Roger was filmed more than once making a cast of a footprint track.

Here's Mike Rugg explaining what they'll be showing at the event:

Mark your calendars for Bigfooot Discovery Day V featuring the lost film of Roger Patterson on the 45th anniversary of the Patterson Gimlin Film, October 20, 2012 in Felton and Santa Cruz. This is an open invitation to all researchers to step forward and help develop a definitive proof of the film. Its especially important that we come together and cannonize thisÂ bit of evidence once and for all especially at this time when naysayers and hoaxers are putting out a new hit-piece on Patterson.

Below is a statement by Bill Munns, after he viewed a couple of clips from the film:

"A preliminary analysis of recently acquired film by Mike Rugg and the Bigfoot Discovery Museum is certain to change our analysis of issues related to the known filmed scene of Roger casting a trackway print. This film reel contains a segment showing Roger casting a footprint track, and then displaying the resulting hardened cast, and it is emphatically a different casting effort than the one commonly shown and often argued by the skeptical community as being the Bluff Creek casting. Further analysis is necessary and a proper 4K film frame scan of the footage is needed, but it can be said on no uncertain terms that the skeptical suspicions often cited as discrepancies between the known scene of Roger casting a track, and the scene showing Roger holding two casts by a tree, can no longer be relied upon to support any hoax claims, because the connection between the two film scenes is now disconnected by the proof that Roger was filmed more than once making a cast of a footprint track.

Based on the footage so far made available to me, I cannot yet make a determination if this newly acquired footage was taken at Bluff Creek, but we now must logically consider the following alternatives:

1. The original known scene of Roger casting a track was at Bluff Creek and this new one is not.

2. The new footage is of Roger at Bluff Creek and the old well-known footage was not.

3. Neither of the footage scenes was taken at Bluff Creek and the actual Bluff Creek described casting footage is still unseen and un-analyzed.

But one can no longer simply assume the old footage of Roger must have been taken at Bluff Creek, because it was the only footage known and talk of a demo casting film was dismissed as a rumor. We now know for a certainty that demo casting footage does exist (at least one of the two known versions of footage must be so), and so any analysis trying to identify Roger casting a track with what is described to have occurred at Bluff Creek must now be proven with a far higher degree of compelling proof than anyone has offered to date.

Spread the word--- its time to pay homage to Roger Patterson, and counter attack the smear campaign.

To attend the event, go here for more information: bigfootdiscoveryproject.com