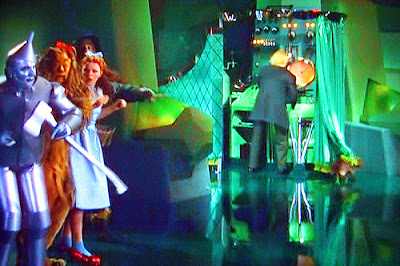 Almost everyone is familiar with the genesis of the phrase, "Pay no attention to that man behind the curtain!" The Wizard of Oz, who uttered this famous phrase. Some people need to see the actual person pulling the levers to be convinced of what's going on. FB/FB is standing firm on their "Camper" authentication video. To pull off something so real-- they believe it would have taken an expert to know the correct anatomical details of a Sasquatch. In an email response to Tim Mitchel, FB/FB's Jack Barnes aka "The smartest man in the world" wrote that it would have been "a tall order" to orchestrate such a thing:

Maybe we were fooled but someone would need to be an expert in the subject. Then who posts a video of an anatomically correct Sasquatch filmed sideways, through a tent for 1.2 seconds. Then to have nobody see it till we posted the authentication. Tall order indeed. We work for a living so we don't do this 24/7. We are serious but this is just serious fun. If it is a hoax, which they adamantly maintain it is not. So we will see...


Since news broke out about the video being a potential hoax-- their fan base has actually increased, probably due to the exposure received from different websites and blogs. Although their fan page seems unaffected by the alleged hoax, their credibility appears to be taking a toll. Here are some comments left on their page:


We waited for what you said was going to revolutionize BF research and we get what looks like is going to come out as a hoax. I have to leave your page. You guys are just like Matty Moneymaker.......every time you hear a mouse fart, it's a BF......No credibility man....Disappointed.


Just because someone puts up a fan page and issues opinions on what might be called "evidence" - does not make them an authority. Nor does announcing a breakthrough make them a bellwether. While everyone demands objectivity, they are not practicing. Be selective in what you believe in everything. A FB fan page is certainly not something on which to base a hypothesis. Hell, most colleges won't allow using Wikipedia as a source, let alone some fan page that a couple guys put together as a centralized information source. It's a "don't shoot the messenger" thing here.


The essence of scientific research is to be objective. I think FB/FB should be just this "objective". Otherwise you are nothing but a bunch of moronic idiots. People tell lies for their own gain, don't become an accessory to this. Credibility is like reputation, takes years to build and a moment to shatter. Which are you, who are your affiliates and what do you expect to gain from false hope? What a load of crap. I tell you what just stick another artists rendering of a bigfoot up and everything will be ok, brilliant. Fools


If you're lost about what's going on. Head over to SasquatchScoop and read Steve's post: Did Rick Dyer Hoax FB/FB?