A Real Life Dragon, Not a Werewolf 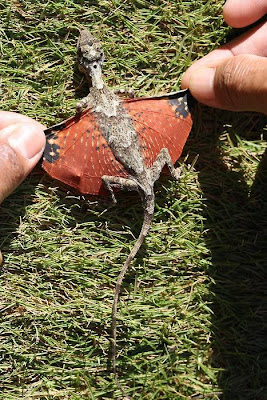 There's other stuff out there to read about besides Bigfoot you know. Like real dragons! This little gal was discovered back in 2009 in Indonesia.

Researchers in Indonesia have discovered what looks like a teeny tiny dragon. As yet, we have no information on whether they guard small piles of gold or attack miniature castles ;)

This was a nesting female found in the Lambsuango Forest reserve in 2009 and was immediately released after this photograph was taken.

No everyone, this is not photoshopped. Just google 'gliding lizard' - there are around 15 described species, mostly found in South East Asia. This is thought to be a new species with the genus but further study will be required to confirm that.