Please don't let this be true. I pray to Baby Jesus that this isn't true. If the Dogman is real, I'm quitting Bigfoot for good. According to Robert "The Machine Gun" Lindsay, sources have mentioned to him that Ketchum's team had been testing Dogman DNA and that they have confirmed it to be a "separate entity from Bigfoot". Lindsay isn't sure how they got the information, but if it's true, I suggest people ask Ketchum for their Bigfoot DNA samples back and send it to Dr. Sykes instead. Again-- Lord, please don't let this be true.


Dogmen are creatures that have been seen and reported by witnesses in parts of Canada and the northern United States. Some of the most compelling evidence suggesting the existence of the Dogman is known as the "Beast of Seven Chutes Photo". According to the witness who took the photograph, although what he saw was standing bipedally (similar to Bigfoot), other attributes were different. Unlike the typical Bigfoot, the creature is much shorter, only standing 5-6 feet tall.

It has an elongated snout that appears doglike as well as silver hair on its head reaching to it's shoulders. The creatures body is black and it's left arm is visible, bent at the elbow and, quite remarkably, the creature is holding a white dog.

It was dark in color but tipped silvery gray...its eyes were glittery and dark, they had no sclera or whites like a human eye in a mask would have. It's head was big, almost too big for its body. It had an elongated snout, but pointy, not rounded like a Lab's. 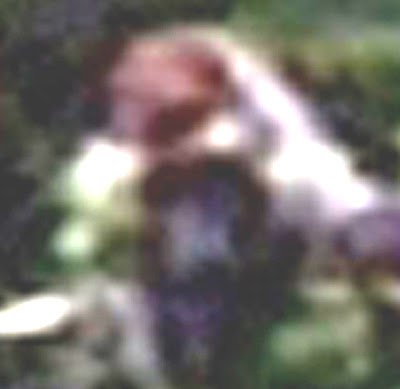