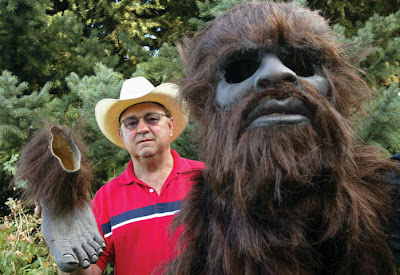 Editor’s Note: Jonathan Poulsen has been researching the Sasquatch since 2008, but really involved himself heavily in 2011. He has since devoted his life to the near impossible challenge of verifying the existence of the Sasquatch. Shawn refers to him as the Bigfoot encyclopedia.

Due to a new trailer from world-renowned Bigfoot hoaxer C. Thomas Biscardi, some people are talking about Bob Heironimus and his alleged involvement in the Patterson-Gimlin "hoax". What alot of the Bob Heironimus advocates don't want to admit is that several other people have claimed to be the man in the "suit".

1.) Mrs. Ray Wallace: During that ridiculous scandle in 2003 that Ray Wallace faked every single Bigfoot track ever found, many newspapers wrote that the Patterson-Gimlin film was filmed by Ray himself, and that his wife was in the suit.

2.) Jerry Romney: Former ANE employee Clyde Reinke said during an interview for the FOX program 'The World's Greatest Hoaxes' that Romney claimed several times that he was the man in the suit. Romney denied this allegation.

3.)(Names unknown): Cliff Barackman met someone on the Smith River a few years ago who claimed he was the man in the suit.

Although these people may be different in terms of personality, they all have one thing in common: they have not provided any proof (or even evidence for that matter), that they were indeed in the "suit".