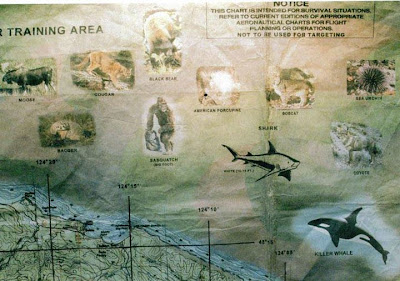 This is a USAF Survival Map depicting sasquatch as indigenous fauna. According to the poster on Facebook, this map is "real".

This is what is noted on the map:


"Generally, the climate is a combination of alpine, subalpine and montane. Hot dry summers and moderately cold and snowy winters. Frequent chinooks moderate winter temperatures. Temperatures average in the 80/90's in mid-summer to lows in the 10-20's in winter. A strong elevational gradient in precipitation occurs, ranging from 15 to over 40 in per year. Elevations range from about 2000 ft. to over 7000 ft. The expansive conifer forests throughout this mountainous region contain hemlock, yew, larch, cedar, spruce, pines and fir. The area has beaver, badger, grouse, waterfowl, rabbits, moose, deer, marten, coyote, squirrels, chipmunk, bears, cougars, bobcat, porcupines, and many sasquatch sightings." 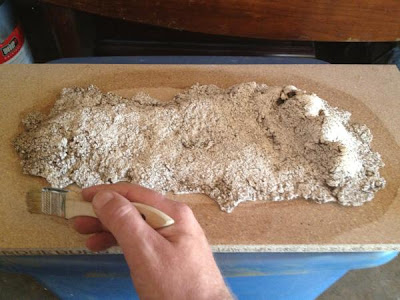 "The vast majority of the London, OR casts have now been cleaned and photographed. Now to make some molds..." - Cliff Barackman

This cast is from the London Oregon Bigfoot track way discovered by a man named Toby Johnson, near a logging road. Cliff Barackman claims it be the "most significant footprint find in the last 40 years." Read about it here. 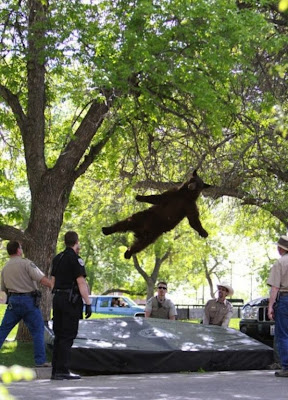 Bear falls safely from tree after police tranquilized it.

In a truly memorable moment, a bear can be seen falling from a tree after being tranquilized by police in Colorado.

The young bear, estimated to weigh between 150 and 200 pounds, had wandered onto the University of Colorado at Boulder campus and climbed into a tree, according to the CU Independent, which captured the stunning image.

"[The bear] was tranquilized by the Colorado Parks and Wildlife Department and it fell onto some mats that the Rec Center provided," CU Police Department spokesman Ryan Huff told the paper. "It is now in a cage and it will be relocated at a higher elevation."

Before it was tranquilized, the bear spent about two hours in a tree near the campus dorms. It reportedly landed safely.