One Possible Hypothesis: The Concurrent Evolution of Humans and Sasquatch 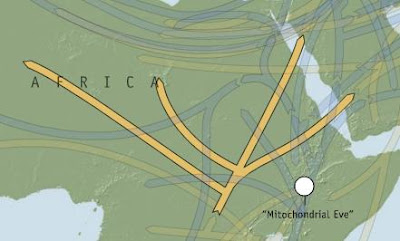 Richard Stubstad, a statistician, was once a major player in sequencing the Bigfoot DNA samples with Dr. Melba Ketchum. Back in June 2011, he published a paper updating us on what he had discovered during the research with Dr. Ketchum. In the article, he provided some of the most compelling evidence and scientific data for proving the the existence of Sasquatch.

Recently, Stubstad had been working on a new piece detailing one possible evolutionary path that these "archaic humans" may have taken to become what we now label as "Sasquatch".

The following paper was just published today by Richard Stubstad. Read below:


Sometime in the not too distant evolutionary past, Homo sapiens sapiens or their closely-related archaic ancestors existed as a human progenitor species. This phase of hominid evolution likely took place in sub-Saharan Africa in the form of a predecessor to sub-Saharan Haplotype L. The time of the impending split between what turned into modern humans and modern sasquatch was approaching. It is quite likely that these progenitor haplotypes were hairy, just like all other land mammals were at the time (and still are today).

Living in sub-Saharan Africa, two warm periods on earth prevailed, each for several tens of thousands of years. One occurred roughly 65,000 ybp and before (evidently the warmest of the two); the other was between 25,000 and 55,000 ybp. A series of mutations took place such that the left-brained functions of modern humans began to develop in these archaic humans. These early hominids began to learn how to manipulate their environment, including fire, shelter and clothing. Agriculture also became a mainstay of the evolving modern human being as well, taking advantage of the highly developed left-brained functions of the mind. With fire and shelter, there was no longer any environmental need for hair or fur, so their genetic make-up slowly but surely evolved in the direction of less and less body hair.

Meanwhile, sasquatch continued to evolve, but instead their evolutionary survival mechanisms primarily relied on right-brained functions, which they successfully used to stay clear of their hairless cousins—pre-modern humans. By then, it was clear to the sasquatch that they were severely outnumbered and, therefore, avoided human contact at almost all costs. This was, as it turned out, also necessary to insure their survival to the present day.

During one of the two latest “Out of Africa” human migration periods, sasquatch also made their way northward, across the equator and into the cooler climatic regions of Europe and Asia. Here, their relatively excessive hair growth wasn’t as bothersome during the hot summers at the time and—of course—where there was enough food to support their hunter-gatherer life style. Later, they also migrated across Beringia, most likely during the late Wisconsin ice age, using the so-called “land bridge” connecting Asia and North America as a single continent at the time.

During these relatively recent periods of hominid evolution, off and on some opportune “interaction” took place between modern humans and sasquatch. This ostensibly occurred whenever a sasquatch male was able to either kidnap or coerce a human female into a sexual encounter and a life in greener pastures as it were. However, their progeny was generally hairy as well; those that were not hairy enough simply perished during the harsh winters, with no fire or shelter available or desired in the environment of sasquatch.

So—modern humans went their way, and sasquatch—as close to a progenitor species that still exists today on the hominid branch of the primates—went theirs. Without their acute night vision, a wide audible hearing range, incessant global awareness of their surroundings, and highly developed right-brained functions, the sasquatch would certainly not be among us today. Little surprise, then, that they have avoided modern humans for the most part, especially since the arrival of Europeans and other non-Indian human haplotypes starting in the 1300's or even earlier (not in 1492 as commonly believed).

Today, sasquatch most likely exist across North America in at least three different haplotypes or subspecies. The related hominids of Europe, Asia and Australia, variously called the Almasty, Yeti, Yeren, Yowie and others likely comprise additional haplotypes or subspecies of the original progenitor species of the sasquatch. This biodiversity is also fortunate; otherwise they would have reached an evolutionary dead-end, just as Neandertal and Denisovan apparently did—both of which may have been “helped along” towards their ultimate extinction by the increasingly numerous and powerful hairless humans within the last 50,000 years or so.

Below are two flow charts showing the five external bodily senses and the three internal (mind or perception) senses that both Homo sapiens sapiens and Homo sapiens sesqueqiensis possess, whether well developed or otherwise. 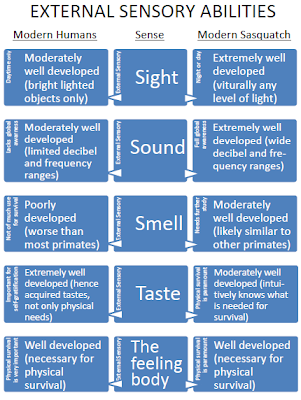 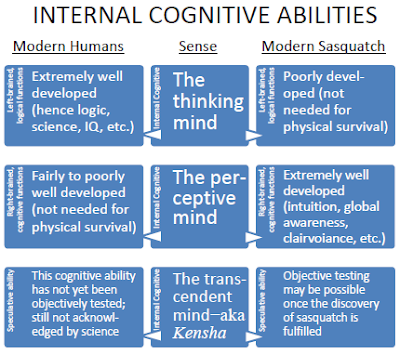