Is Sasquatch/Bigfoot Using Underground Caves to Elude Us?

While having a conversation with members of my group “Sasquatch Lives?” on Facebook, one member named Kevin D. asked a question: "This is to everyone! What are your thoughts on Sasquatch/Bigfoot using the caves to travel thru? This may be one way to keep from being seen also!"

It was a surprising question that made me wonder if this could be possible. In North America there are hundreds if not thousands of caves, many of which have yet to be explored completely. We also know that modern man in its early beginnings used caves as shelter from the elements. Some may find the idea of Sasquatch using caves farfetched, but a creature with this supposed high level of intelligence may use this as an advantage in some areas of North America.

Caves have numerous short term food sources if a Sasquatch/Bigfoot would want to use it for shelter or as a route to evade being seen. From small bugs to fish, lakes and small rivers exist in underground caves. Many may argue how they would be able to see in such dark places, but some small monkeys have developed low-light adaptations such as membranes in the back of their eyes know by the scientific name tapetum lucidum. This membrane is responsible for the eye shine you see with certain animals.


Per the description in the Wiki Encyclopedia:

tapetum lucidum (Latin: "bright tapestry", plural tapeta lucida) is a layer of tissue in the eye of many vertebrate animals.

It lies immediately behind or sometimes within the retina. It reflects visible light back through the retina, increasing the light available to the photoreceptors. This improves vision in low-light conditions, but can cause the perceived image to be blurry from the interference of the reflected light. The tapetum lucidum contributes to the superior night vision of some animals. Many of these animals are nocturnal, especially carnivores that hunt their prey at night.


Now we will not be able to determine if Sasquatch/Bigfoot has such capabilities until he is proven to exist and a specimen of this creature is studied thoroughly. This can make you wonder if this adaption could be one of the reasons why Sasquatch/Bigfoots is able to elude us.

In the vast landscapes of North America which is full of amazing wonders, I sometimes think that what makes Sasquatch/Bigfoot seem mystical to many American Indian tribes and other believers of this creature, maybe these evolutionary adaptations that could give Sasquatch/Bigfoot these amazing abilities that are at times seen in sighting descriptions.

Types of caves per Wikipedia: 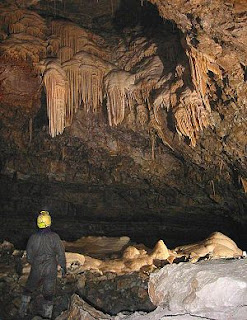 Solutional caves are the most frequently occurring caves and such caves form in rock that is soluble, such as limestone, but can also form in other rocks, including chalk, dolomite, marble, salt, and gypsum. Rock is dissolved by natural acid in groundwater that seeps through bedding-planes, faults, joints and so on. Over geological epochs cracks expand to become caves or cave systems.


Some caves are formed at the same time as the surrounding rock. These are sometimes called primary caves. Lava caves include but are not limited to lava tubes. Other caves formed through volcanic activity include rift caves, lava mold caves, open vertical volcanic conduits, and inflationary caves.


Sea caves are found along coasts around the world. A special case is littoral caves, which are formed by wave action in zones of weakness in sea cliffs. Often these weaknesses are faults, but they may also be dykes or bedding-plane contacts. Some wave-cut caves are now above sea level because of later uplift. 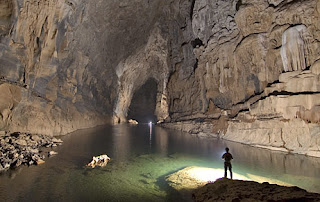 Corrasional or erosional caves are those that form entirely by erosion by flowing streams carrying rocks and other sediments. These can form in any type of rock, including hard rocks such as granite. Generally there must be some zone of weakness to guide the water, such as a fault or joint. A subtype of the erosional cave is the wind or aeolian cave, carved by wind-born sediments. Many caves formed initially by solutional processes often undergo a subsequent phase of erosional or vadose enlargement where active streams or rivers pass through them.


Glacier caves occur in ice and under glaciers and are formed by melting. They are also influenced by the very slow flow of the ice, which tends to close the caves again. (These are sometimes called ice caves, though this term is properly reserved for caves that contain year-round ice formations).

This theory might not hold up to many who do not believe this creature exists. Without scientific proof, some may say that hypostasizes and conjectures will not stand, yet science has proven theories in the past that to others seemed unlikely.