There Will Be No "New" Finding Bigfoot Episode Tonight, But Here's A Spoof You Might Enjoy 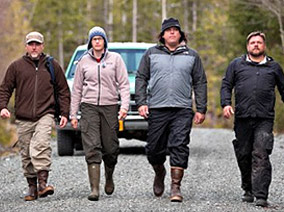 When we said there won't be any new episode of Finding Bigfoot tonight, we're not being accurate. According to the Animal Planet TV schedule, there will be a "The Best of Finding Bigfoot" special premiering tonight.

If that's not enough for you, Autumn Forest wrote a hilarious Finding Bigfoot spoof. Here's a snippet from her blog:

This is another in my series poking loving fun at the paranormal-reality shows. This time, the focus is my favorite show, “Finding Bigfoot” and most especially the team leader, Matt Moneymaker who, well, gives me a lot of material to work with and his nemesis, Ranae (the skeptic).

In the dark forest, Matt and Ranae are teamed on a hillside, sitting it out for the night.

Matt: Don't move! There's a squatch around here. (searching around them in the dark forest) This kill is new. Squatches kill deer for food.

Ranae: But, Matt, this deer hasn't been touched.

Matt: (snarls) It would have eaten it, but we scared him away.

Ranae: This thing has rigor mortis. It died long ago. It doesn't have any cuts or bleeding. It might have fallen off that rock ledge up there and broken its neck.

Matt: I'm telling you, it's part of a master plan by the squatch. (points a finger in the air) He kills a deer and leaves it here as a snack for later on. It's like we're standing in a pantry for the squatch. (coyote howls and he startles and steps back).

Matt: No! Shh! (listens) That's a squatch! Don't let him fool you. He sounds like a coyote to confuse the humans.

Ranae: Why would a squatch do that? How would his own kind know it's him?

Matt: (chuckles knowingly) See, that is exactly what he wants you to assume. He has his own language in Coyote talk.
[...]