M.K. Davis Says Not To Dismiss Melissa Hovey's Bigfoot Photo, Even If A Movie Guy Tells You It's A Photo Of His Creature 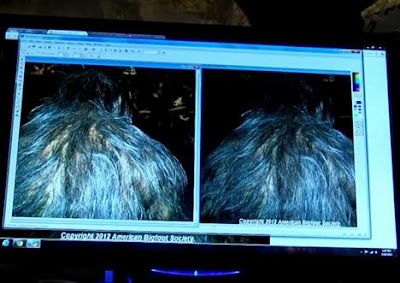 M.K. Davis has been researching the Patterson-Gimlin Bigfoot film for the last 14 years. Davis announced last December that he was quitting the scene and was looking for something else to do with his time.

And then the Melissa Hovey photo surfaced...

In the video below, Davis examines the Bigfoot photo released by Melissa last Thursday. Unlike others, he's not so quick to dismiss it. He says that if the photo is real, it could provide important clues about the creature.

Davis says to beware of Special FX experts who claim the photo is of their creature. He talks about the "John Chambers effect" where John Chambers, a make-up artist who created the masks for Planet of the Apes, was thought to be the person responsible for the Patterson-Gimlin suit. Chambers never objected this theory and it led many to believe that he was the person who made the suit.

According to Davis, Chambers later admitted years later that he had nothing to do with the Patterson-Gimlin film. Davis quotes Chambers an interview: "When they said it was me, I didn't object because it was good for my career."