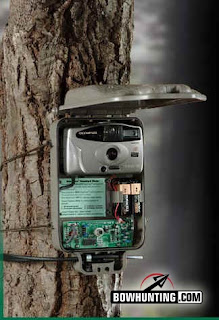 New details are emerging from the conversations between Melissa Hovey and the person who sent her the game cam photo of Bigfoot in 2008.

Back then, digital game cameras were on the rise, replacing older 35mm film type cameras. According to Melissa's conversation with the person, she learned that there "was a multiple camera set up designed specifically to photograph this alleged animal." This recent statement is consistent with previous blog entries where Melissa mentioned that this person may have "a series of photos." Supposedly, the photo recently released by Melissa on Thursday was captured using "a 35mm camera with zoom."

Considering that the photo was captured on 35mm film, perhaps even more detail of the creature can be extracted from the negative (when it becomes available). Technically, a scan from a quality 35mm camera is equivalent to a shot produced by a 5300 x 4000 digital camera. Unlike images from a digital camera (especially back in 2008), you could blow up the 35mm shot a little bit more and see a little bit more, but at the cost of producing a grainy image.

Here's an update Melissa wrote on her blog yesterday:

This is just an article to update everyone on some important information – so PLEASE read the entire article.

First of all to those who are emailing me privately and sending messages of support and thanks for showing this photo I want to say – Thank you!! This decision was not an easy one. I will work hard in the next few days to respond to each one of you personally. I feel I owe you that much.

There is a very good side to this community. I wish I seen it more.

Now onto information that many people are asking about.

Let me say first, I am not the kind of person who understands, “technology”. 99.9% of the time when conversations start over equipment, and their operation, I shut down and am not even listening. Just ask Wayne he is the tech guy in this household.

After I posted this photo on my blog, I didn’t expect to hear from this witness ever again. Then last night he did in fact email me. While I am not going to get into the bulk of the conversation I will disclose this, because I think it’s important.

He apologized for any confusion and told me this was not the typical game cam set up we are all accustomed to. He said this was a 35mm camera with zoom. He is not sure how the miscommunication happened, but I think he wanted to clarify this piece of information. He said this was a multiple camera set up designed specifically to photograph this alleged animal.

Most likely the miscommunication was on my part due to a lack of understanding when it comes to some of the technical equipment we use in the field. I remember early conversations after the photo was initially analyzed and I was told something about 35mm film. Which, of course, didn't mean much to me. I told this to Wayne and he thought I was confused and this must have been a game cam. So, there was much confusion on this point, stretching back 4 years.

Hopefully, when he contacts me again (as he said he would) we can discuss more. I have no reason to doubt that he will.

But, I will not disclose anything he does not want discussed in public. All I can do is hope everyone understands.