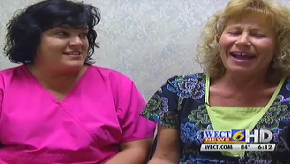 Two women took a break from their nursing job and set out to look for Bigfoot. Linda Durden and Jannette Skinner both share a fascination with Bigfoot, and after hearing reports of Bigfoot being spotted in the Uwharrie Forest, the pair decided to have a look for themselves.


According to local news WECT, Durden and Skinner traveled across rough terrain, hauling raw deer meat, trail-mix and anything they could think of to lure the hairy creature. The women were inspired by a report that showed a North Carolina man named Mike Greene using candy bars as bait, because he said bigfoot has a sweet tooth. Two years ago, Mike Greene claimed he captured video of Bigfoot in the Uwharrie National Forest. The Finding Bigfoot TV show investigated Greene's thermal footage and said it's possible the creature his video is a sasquatch and not a person.

Although the two nurses didn't see bigfoot himself, they did find a footprint they know the Bigfoot Research Organization would consider as evidence. They said the trails in the forest were eerily quiet with no signs of wildlife.

Durden and Skinner plan to return to the Uwharrie Forest in April to try again.