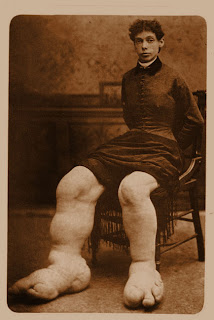 Fanny was born in England in 1860 and immigrated to to Sandusky, Ohio shortly after her birth. From an early age, Fanny began to show signs of Milroy’s Disease. Milroy’s is essentially a Lymphedema – a gross swelling, fluid building and discoloring of the soft tissue – localized only to the lower extremities. It is most common in women, with seventy to eighty percent of all those afflicted being female, and the severity of the inherited condition varies.

Although Fanny was a tiny woman, weighing in at a lithe 115 pounds, her feet expanded to require a size 30 shoe.

Fanny’s feet were said to have measured more that nineteen inches long and seven inches across. Her shoes – rumored to be made from the skins of three goats – were slipped on over pillowcase socks. She was unable to walk without assistance and, when she began exhibiting herself at Dime Museums in 1885, she brought along her friend Mary Brown to serve as a nurse and attend to her special needs.

It did not take very long for promoters to label fanny the ‘Ohio Bigfoot Lady’ and litter the areas surrounding the dime museums and the carnivals Fanny attended with posters and pamphlets. Promoters also began to issue a strange promotional challenge. A reward of five thousand dollars was put up to any man willing to marry the Ohio Bigfoot Lady.

The challenge was successful as droves of bachelors came out to the show to take a look at Fanny – all paying an admission fee to see her. Many of these men were hoping to marry Fanny. However Fanny was already married to a man named William Brown – a man who happened to be the brother of her friend and nurse, Mary Brown. Furthermore, he married her free of charge.

At her peak she was earning more than $150 a week – a small fortune at the time. However after giving birth to a stillborn child in 1887, Fanny’s health began to fail. Her health eventually forced her to retire in 1892.