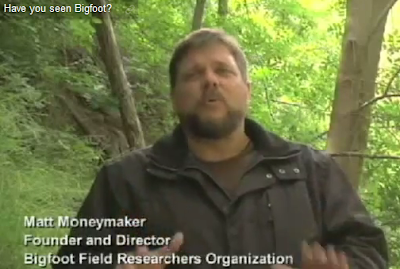 When I stumbled upon a question posted on Yahoo Answers asking about whether or not humans descended from Bigfoot, a skeptic who calls himself Lord Bearclaw of Gryphon Woods used the opportunity to write an essay against the existence of a large bipedal human-like ape roaming the Pacific Northwest. The skeptic made some interesting points, and claims it's "flat-out impossible" to maintain a viable population due to nutritional requirements these creatures would need to survive.

We figured the claims made by the skeptic needs a fair rebuttal, so I contacted Matt Moneymaker. Moneymaker is president of the BFRO or the Bigfoot Field Researchers Organization. He's also a frequent visitor of Bigfoot Evidence. We decided to shoot the skeptic’s rant to Moneymaker and ask if he can write a comment refuting each paragraph. We would like to thank Matt Moneymaker for taking the time to write us back.

And here is skeptic Lord Bearclaw of Gryphon Woods’ answer, along with Matt Moneymaker’s comments:

Skeptic: Bigfoot is not real. For any species of that size to actually exist requires shelter, food, and warmth.

A community of primates has to breed to continue their existence, and the numbers necessary for species viability preclude any single small community of Sasquatch. Such a species would need to breed in order to maintain population levels and to offset the death rate from age, sickness, accidental death, and even homicide.

MM: Correct, but if you believe that bigfoot researchers claim there is only one single small community of them, then you are engaging in your own fantasy, because no one makes that claim.

Skeptic: Such a large community would require massive amounts of food to sustain, and even if they were strictly vegetarian they would strain the resources of any given area within weeks and would be constantly on the move, foraging and gathering.

MM: This statement is copied from other ignorant skeptic claims, all of which all false. There are other large omnivores in North America too. None of them manage to strain the resources of a given area. They are all on the move, but most remain in the same 2 mile radius most of their lives.

Skeptic: Yet there is no forensic evidence of any kind of a nomadic primate tribe anywhere.

MM: On the contrary, there is loads of forensic evidence. Meldrum's lab is not full of annecdotal evidence.

Skeptic: Instead of finding one or two isolated “footprints” we would have come across whole trails of Sasquatch prints, and such trails would be stripped completely bare of any edibles, and would also contain piles of droppings and fur samples caught on the trees and bushes.

MM: It's extraordinary how ignorant most skeptics are. These statements exemplify that typically smug ignorance of most skeptics. Lines of tracks have found several times. Bushes and trees with berries or fruits are found systematically picked. Hair samples have been found and collected.

Skeptic: No such evidence has ever been found.

MM: Wrong. Those sorts of things have been found many times.

Skeptic: Supposed hair samples of “unknown origin” have been long held up as “evidence”, yet I cannot find one actual report from any scientific lab about such hair samples.

MM: That's right. You can't those reports, even though they do exist and have been mentioned in newspapers over the years. An analysis of a hair sample doesn't necessarily lead to a full blown "report" and notes about those analyses aren't necessarily published online. This skeptic makes loads of assumptions.

Skeptic: As for warmth, even a Sasquatch would find it difficult to stay warm in the Pacific Northwest during the rainy seasons. Even a core temperature drop of just three to four degrees can result in hypothermia and death.

MM: So by this same logic ... bear, deer, elk and humans could not have survived in North America without living in caves during the rainy seasons.

Skeptic: This would mean that any sizeable community would invariably seek shelter of some type during inclement weather, and any member of the community that died would have one of two things happen to their corpse: one, they would be left behind where they died, or two, if the community was carnivorous the corpse would simply be eaten. However, all stories indicate that such creatures would be vegetarian or omnivorous at best, and not aggressively carnivorous.

MM: These skeptical statements reveal a curious phenomena among skeptics. Some make authoritative-sounding statements that reveal a total lack of familiarity with the topic about which they pontificate. This one goes beyond that. It's totally deceptive. "All stories indicate that such creatures would be vegetarian" clearly demonstrates that this person is not familiar with any observations by witnesses, because many of them suggest a connection with deer and predation on deer.

Skeptic: The reason for this is because there are no attacks. A carnivorous community would doubtless find it much easier to raid a human dwelling and carry off the inhabitants for food, especially during winter.

MM: Again, the anonymous skeptic reveals an embarrassing lack of knowledge about North American ecology. There are mountain lions throughout the western mountains, yet attacks on humans are exceedingly rare, but by the logic of this ignorant skeptic, humans would be routinely killed by mountain lions, especially in Winter. The fact is ... those places where mountain lions reside have abundant natural food supplies. The same applies to bigfoots.

Skeptic: Such behavior would be on par with bear learning that it is easier to raid villages and garbage cans than to hunt for themselves. After all, it would be much easier to attack an isolated home than to run down deer through snow.

MM: That sure sounds logical, but it proves that this skeptic has no clue about wildlife populations, and especially predator populations, in North America.

Skeptic: The fact that there are absolutely no corpses found means only one thing: there are no such things as Sasquatch.

MM: Corpses don't remain corpses for very long, as any ecologist will tell you. A rare population would not leave behind many remains. There are no fossils of chimps or gorillas either.

Skeptic: We have already ruled out carnivorous disposal of deceased members, and such creatures would likely not “bury” their dead, as they could only dig with their hands and any such “grave” would be shallow at best.

MM: This "skeptic" is probably no more than 13 years old, judging by the laughable stupidity of his statements. To him it's a foregone conclusion that you need a shovel to dig a deep hole, and that shovels are the only tools that would allow someone to dig.

Skeptic: Such creatures would not be intelligent by any stretch of the imagination, at least not by human definitions, because even Cro-Magnon man made and used tools. Yet not one sample of a Stone Age tool has been found in the woods that isn’t an actual relic from the Stone Age, certainly nothing made in the last two hundred years that wasn’t easily identifiable as having Native American origins. No shovels, no hammers, no axes, no spears. So if they are not intelligent enough to use tools, then they are certainly not intelligent enough to completely conceal their existence or to dispose of their dead in such a manner as to preclude discovery of the corpse.

MM: These skeptical statements are so speculative and presumptive that they don't even deserve a response. Even well-read skeptics would find these statements absurd and amateurish.

Skeptic: With the numbers needed to maintain genetic viability of such a community, nutritional requirements, and the need for shelter as well as forensic evidence, it is flat-out impossible that we would not have found or captured a living Sasquatch by this time, especially with the sheer number of hikers, campers, hunters, ATV enthusiasts, forest rangers, Bigfoot “hunters”, people who live in homes deep in the woods, scientists, etc. etc. etc.

MM: Again, this skeptic is pretty clearly a child who is very unfamiliar with the topic, and unfamiliar with any of the related scientific disciplines, such as ecology and zoology.

Skeptic: There is only the flimsiest “evidence”, consisting mainly of easily faked photos and video footage, usually blurry and at a distance, and isolated “prints” again easily faked, that are never part of an actual trail. Any outdoorsman worth his salt would find it easy to track such a large creature, especially considering that in order to have survived all these millennia it would require a large community to maintain species viability.

MM: More ignorant spoutings by a frustrated child. The only thing it demonstrates is the lack of moderation on "Yahoo Answers". Anyone can post anonymously. That opens the door for amateurish claims such as those made by this pubescent poster.