Or Click here to watch video
The Aussies have been hanging out with the FB/FB (Facebook Find Bigfoot) guys for a few weeks now. On May 22, they decided to update us on what they thought about the expedition and Bigfoot so far. The verdict? They're still undecided about Bigfoot.


That's why this is so interesting. You see, it's a lot more interesting when you have people asking the right questions, like, why haven't we found any Bigfoot bones, or why haven't we captured one yet? These great questions only come from innocent bystanders and innocent Aussies. Nevertheless, these Australians hope to be proven wrong.

FYI: Aussie is Australian slang for an Australian.

Matt Sharp (one of the Aussies from the video): 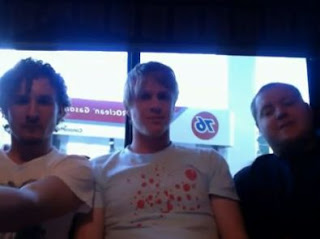 Hey guys, we do not believe in the existence of Bigfoot. However, I strongly believe in the 'possibility' that it could exist. The film is not about documenting the existence, it's about documenting the culture and community of researchers, and asking questions about it's existence. We are following a group of researchers to find the facts and the opinions, so viewers can make their mind up on whether or not they think it exists. I think it's a fascinating subject, regardless of whether or not we believe it exists. My hope is that Bigfoot researchers may be taken a little more seriously as a result of this film.