Who is Matt Moneymaker?

By Shawn - April 13, 2011
Matt Moneymaker speaks to an anthropology class at the College of the Canyons, north of Los Angeles, in late 2009.

Matt Moneymaker was born and raised in Los Angeles, California. He developed an interest in the bigfoot legend at the age of 11 after watching the famous 1970's documentaries on the subject.

While attending UCLA in the 1980's he began corresponding with other bigfoot researchers in the United States and Canada. His first track discovery was in the mountains of Ventura County, California in 1987.

In the early 1990's he moved to eastern Ohio where many sightings and encounters had been reporter by farmers during the previous 10 years. His first close encounter with a bigfoot occurred during an overnight stakeout in a swampy wildlife refuge southeast of Kent, Ohio in 1994.

In 1995 he connected with other bigfoot researchers on the nascent World Wide Web and formed the Bigfoot Field Researchers Organization. In 1996 he launched the web site for the BFRO and began investigating and publishing eyewitness reports on the Internet.

He organized the first big expedition for the group in 2000 in Skookum Meadows, Washington. For the next few years he co-produced a few television projects about the bigfoot subject before he began organizing field expeditions in different parts of the country, which he still does today.

Matt Moneymaker is well known among bigfoot researchers and is credited with being... 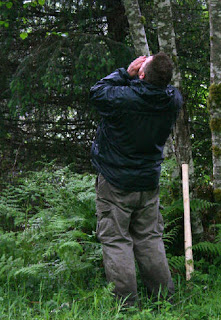 Matt Moneymaker calling out a Bigfoot

Found in a remote area of the Cascade Mountains known as Skookum Meadows, the BFRO team cast the imprint using more than 200 pounds of plaster. Named the "Skookum Cast," this monumental piece of Bigfoot evidence is shipped to a laboratory in Seattle for forensic analysis.