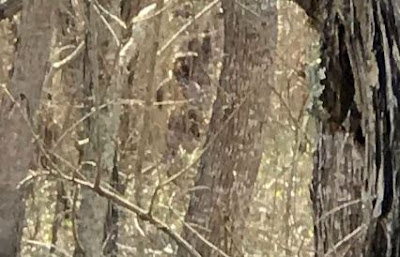 A man near Trinity, Texas had a bigfoot sighting while scouting locations with his hunting partner. He was able to get close enough to take the photo of the creature above.

As the pair walked towards the pond, SB noticed movement in the trees. A 7-8 ft. hairy being stepped out from behind a large tree, and began to sway back and forth approximately 40 yards away. The being seemed to be taunting the observers, though there was no sound. SB said that it had a very broad body and that the hair color blended in with the mesquite trees.

SB and his companion realized that they didn't have their phones with them, so they immediately went back to their truck. While in the truck, SB searched Google in order to make a report and then contacted me. He told me that he had seen the Bigfoot only 20 minutes earlier, and that they were going to go back towards the woods. I asked him to stay in contact.

Approximately 10 minutes later SB called back and stated that they had gotten within 30 paces (he later stepped off the distance) of the Bigfoot. He was very excited and said that his companion had gone further into the woods to try a get a photograph. 15 minutes later, I received the unretouched photo posted below. SB called and said that this was the clearest photo that they could obtain at a distance of 50 yards or so.