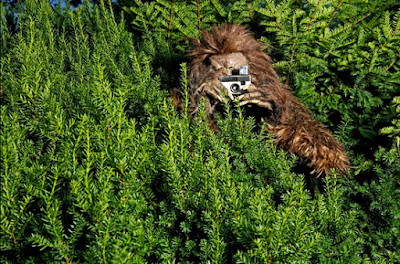 A bigfoot witness in Arkansas writes a letter to the local paper about their encounter. Check it out:

The year was 1978, it was about 1 a.m. and I was on old Highway 88, taking a shortcut from Highway 70 west to Highway 270 west near Lake Hamilton. I was coming home late from a trip. As I was slowing to round a sharp curve on the very small road, a hairy monster which stood 8 to 9 feet tall stepped in front of my car and put his/her arms high in the air as if to say "stop." I will never forget how ugly the creature was. I swerved to the right and in one step this monster was in front of me, I swerved sharply left and then sharply right, each time I swerved the monster stepped in front of the car ... my right tires were off the road when I stomped the gas peddle to the floor, causing the car to slightly "fishtail" just as I passed this horror, there was a loud "thud" on the roof or trunk as I shot by it.

It was all I could do to keep my speed down as I traveled the small, narrow road to the next highway. There was no moon and it was very dark that night. I had several miles to travel over the very small road to the next major highway (270 west) and I kept wondering if the monster was on my car. I should have realized that I would have felt the weight if that enormous creature was on the car, but in a situation like that, it is hard to remain rational.

After I turned west onto Highway 270 west I came to a convenience store and pulled under the lights. I was relieved to find no damage to my car.

That is not the sort of thing you tell a lot of people. However, I do know that "Bigfoot" is for real. Since then, I have traveled over that spot many times and have not seen anything.

A few years ago I was test driving a new car that I was going to buy and the salesman happened to drive by that spot and I told him about my experience there. He had little to say. I have not told many people about this encounter. I wonder if there are other people who have had similar encounters but hesitate to report it?