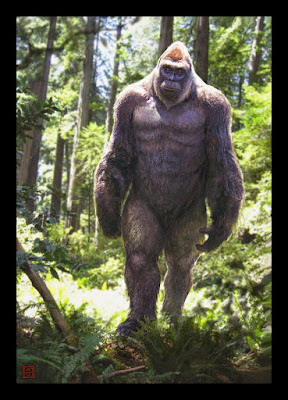 Bigfoot has been long talked about in the state of Texas, and hundreds of reports have come from the Lone Star state. Here's a recent article about the Texas bigfoot.

When Texas was just a burgeoning state, fantastic tales of human-like creatures permeated the folklore.

“In the spring of 1845 when going to my work one morning I discovered the tracks of three persons who had been near the house the night previous,” wrote Samuel Rogers, whose story was re-told in the J. Frank Dobie book Tales of Old Time Texas.

“…the unknown folks had been around us nearly one year. Then we missed the tracks of the big one and the little one. I must say that I felt a little sorry that the one that made the small tracks was gone without ever finding out who it was or what induced the person to live such a life. I spent many nights watching but never could get a glimpse of any of the three wild ones.” Sam Rogers’ accounts, perhaps the first written, gave rise to the Bigfoot legend in Texas even though spoken accounts of a creature living along the banks of the Navidad River began as early as the 1830s.

Settlers along the southeast Texas river bottoms had numerous, secondhand encounters as reports about pilfering crops, livestock and supplies in the rural area were numerous.

Today, the legend of The Wild Woman of the Navidad persists and stories of an unknown creature even found its way into a retro-styled, 2008 independent horror film that draws upon journals written in the 1970s by Dale Rogers of Sublime, Texas.

However, there’s been no gap in Bigfoot sightings from the 1830s to the time the film was released. Texas is peppered with historic and contemporary Bigfoot sightings (the reports come mainly from the densely forested land east of I-35), and there’s even a group who’s dedicated to uncovering the mystery of the cryptid by using old fashion detective work and high tech science.