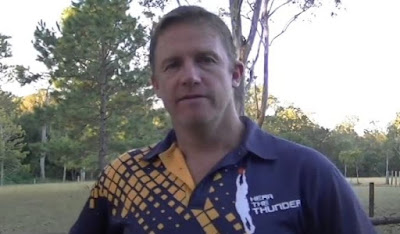 From the Yowie Chronicles:

The Yowie, Australia's version of Bigfoot and the Yeti has been encountered by many since the 1870's. It is a common belief that there are 2 types of Yowie, the big one which is 7-10 feet tall and the smaller version being between 4-5 feet tall. Many believe the smaller Yowie to be the most dangerous with many accounts of this creature attacking people.

Our Yowie story began in 2012 after reading a magazine article about Australia's "Yowie Hunter", Dean Harrison and his encounters with these creatures. As we read we learned these encounters occurred very close to where we lived which naturally seized our attention.

Shortly after this my family and I were sitting around a campfire singing and toasting marshmallows when my wife suggested the strange growling coming from the riverbank might be the Yowie. I initially dismissed the idea until I needed firewood and it so happened the best firewood available was a pile of driftwood at the top of the river bank, right where the growling was coming from. As I made my way to within 10 metres of the wood pile a loud aggressive growl came from directly behind the wood pile where an 8-10 dropoff to a lower part of the bank was located. I froze for about 10 seconds, partially soiled my pants, regathered myself and took a couple more slow steps forward. The growl that followed was so aggressive and so blood curdling I freaked out, turned around and immediatey sprinted back to where my family was. We decided to drive our 4WD down to the edge of the river bank and shine the headlights. We saw and heard nothing for the rest of the night. The creature had disappeared.

Since that first Yowie encounter we have had countless other encounters including sightings, growling, howling, footprints, heavy running and the list goes on.