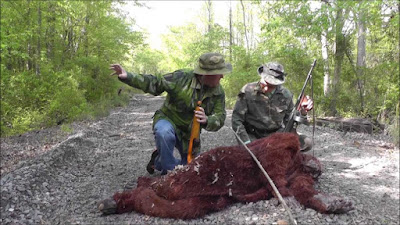 Most people would feel lucky to have a bigfoot sighting, but an Alabama family is tired of it. They say if someone doesn't come get rid of the bigfoot that's been bothering them, they are going to kill it.


He described it as an 8-feet-tall creature with brown and red hair. Its back, he added, was “very muscular” with 16-inch feet and 5-feet-long arms.

“It was maybe about 800 pounds and it smelled of cheese gone bad. It never turned so I could not see its face.”

The Texan said he was “too scared to move” and that he observed the animal for about 20 minutes. He was reportedly not able to snap a picture of the unproven creature.

“My cellphone was on a charger across the room,” he told Mike Brumfield. “I did not want to move and scare it away.”

He added that when the creature was done going through the trash, it “took a leap to the ground” and crossed a 30-foot road in “two strides”.

“It went down a ravine and was gone.”

But, according to the family, the bipedal being has been showing up often and hurting their pets, which they keep outdoors.

“We know where it lives and how it travels, all we want is for someone to capture and remove it, or we will find it and kill it.”