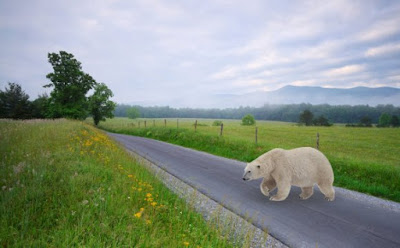 Texas is the last place you'd expect to see a polar bear, but that's how one Texas man described the creature that he saw. If it wasn't a polar bear, what was it?

Roughly 6 months ago my father was driving near Navasota, Texas, time was roughly 3 a.m. if I recall correctly the original telling. He was shocked to see what he describes as a white polar bear figure on the side of the road. He tried to circle around but there was another vehicle behind him that prevented him from doing so. He only got one look at the creature. He immediately called my mother to tell her a polar bear had escaped from the zoo. My mom can confirm that he was freaking out and confused.

This was near a high game fence. We later assumed someone was harboring an exotic animal that got loose. Looking back, this of course is not feasible for a polar bear as this area of Texas reaches 100 degrees plus. There were likely deer inside that game fence. There are several game ranches in this area as it is rural and deer breeding/ guided hunting is a lucrative business here. Keep that in mind a food source.


Read the rest of the article here.