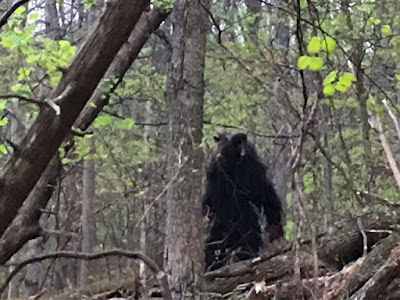 An insane looking photo of the legendary goatman has surfaced recently, reportedly taken in Maryland. This is either a great costume, or the real deal. Either way it's really creepy looking.

A man named Ryan Davis reportedly took the photo, and had this to say:

I’m in DC for the GRC summit starting today and was playing tennis Saturday morning at Montpelier Park while some friends played golf at Pawtucket Greens. As we were packing up we saw something on the forest bordering the park. As I took out my camera phone it came up onto two feet and I realized it was a goat. I told some people back in DC about a goat waking on two legs and they said it was some old Maryland Goatman legend. I called WBAL in Baltimore and talked to someone about it but I don’t think they believe me. They think it’s a bear holding a freshly killed goat. They ran the story this morning. As a reader, thought you might enjoy.