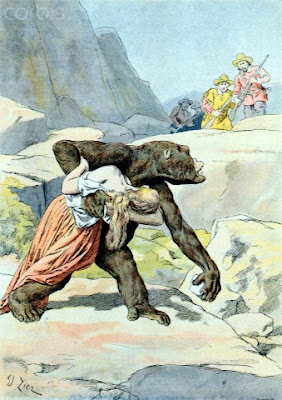 From SasquatchChronicles.com: They Are Men Stealers

Mar 21They are men stealers Elkanah Walker (1805-1877) was an American pioneer settler in the Oregon Country in what is now the states of Oregon and Washington. Walker was born August 7, 1805, the sixth child of Jeremiah and Jane Walker, on a farm near North Yarmouth, Maine. He attended the Bangor Theological Seminary.

The Walkers traveled to the Oregon Country with other missionaries.

From August 1838 to June 1848, under the auspices of American Board of Commissioners for Foreign Missions, he and Cushing Eells and their wives created and lived at the Tshimakain Mission, studying the local language and bringing their Protestant faith to the Spokane People.

Elkanah wrote in diary the following: “Bear with me if I trouble you with a little of their superstitions. They believe in a race of giants, which inhabit a certain mountain off to the west of us. This mountain is covered with perpetual snow. They (the creatures) inhabit the snow peaks. They hunt and do all their work at night. They are men stealers.

They come to the people’s lodges at night when the people are asleep and take them and put them under their skins and to their place of abode without even waking. Their track is a foot and a half long. They steal salmon from Indian nets and eat then raw as the bears do. If the people are awake, they always know when they are coming very near by their strong smell that is most intolerable. It is not uncommon for them to come in the night and give three whistles and then the stones will begin to hit their houses.” (Drury 1976, pp. 122-123)