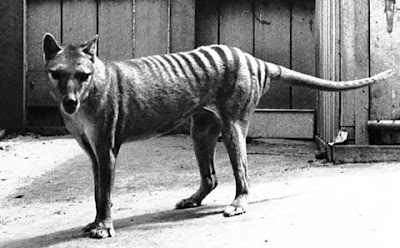 Even though the Tasmanian Tiger has been declared extinct for years, there are still reports of them being spotted by people on a regular basis. But those reports come from Australia, until now. A man driving down an interstate in Tennessee claims he saw a creature that matches the physical body shape of a Thylacine.

“I was riding in the passenger seat, my wife was driving,” Kind said. “We were taking our four year old son to have dental surgery. I look up at this tiered ridge line mountain and see this animal next to a full-grown deer just 7 feet from it.”

The Tennessean added that he initially thought the animal was “just a coyote”.

“I then realized was not. I’ve tried to tell myself it was just a coyote, but I have never seen anything that looked like that, especially the size.”

King said the animal was “taller than the deer”. Its face, he added, looked like a mix between a fox, a wolf and a cat, with short hair and a long tail that looked like a rat’s. He also claimed that it was not a cougar. He believes he was about to pounce on the deer.

“It reminded me of a Tasmanian tiger. It looked like something that scale the face of a rocky cliff with no effort. I could see the muscles in this thing, the body. Big body, skinny but not unhealthy, muscular like puma or large cut, but slender. Long face, pointy ears, slanted dark eyes, very long tail… Very large.”